PlayStation has revealed their lineup for PlayStation Plus free games for October.

Each month, PlayStation offers their PS Plus subscribers a small selection of free games for download that typically includes two games each for PS4, PS3, and Vita. This month’s selection includes the HD remake of the original Resident Evil, one of the games that helped pioneer the survival horror genre, and a Transformers game that will have a lot of nostalgic value for fans of the original TV series. There are also a couple interesting-looking visual novels for Vita owners.

See the full list of free games below, and stay tuned to Heavy.com for all your gaming news. 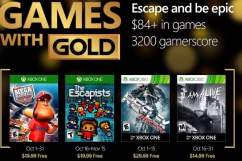