Well, the summer has come to a close.

And with that, we’re going to focus on the Android games that landed in the Google Play store in August. If you managed to take a break from getting a wicked suntan and weekly BBQ’s, then hopefully you spent some time with these free mobile games. If you didn’t, then now is the perfect time to get a piece of this fresh interactive entertainment. You’ll notice that this lineup lends itself more to the RPG audience. But fans of other game genres who want to step out of their comfort zone should take a chance on these picks of ours.

Without further ado, these are our top five best new free Android games of August 2016.

Man…Final Fantasy XV got delayed for the umpteenth time. That rocked our very JRPG core, but luckily we got something to hold us over till its November 29th launch. So the addictive pinball minigame that’s featured in FFXV has been given a headline spot on mobile devices. Justice Monsters Five (or “V” if you prefer to make that game title look way more amazing) throws you into a fantastical universe where five mystical heroes fight to put a stop to Lord Vexxos’ plans. All you have to do is keep an eye on the board and make sure your ball is efficient in taking down all those minions. Even better is the fact that you can recruit those creatures and add them to your heroic cause. The cool mix of arcade pinball action and RPG mechanics makes JMV our top pick for this list.

Final Fantasy was on a roll this month, wasn’t it? Props goes out to Square Enix for their efforts towards building up their main franchise to greatness once again. Mobius Final Fantasy looks like some long lost past-gen entry that never got released. It seriously looks like something that shouldn’t even run on mobile devices. Luckily for us, it runs smooth and gives us one of the more meaningful mobile franchise spinoffs in recent memory. What you’re given here are some good ‘ol mobile RPG basics: HD graphics, a gripping plot, plenty of appearances from familiar faces and a battle system outfitted perfectly for fervent tappers. The job system is the most standout feature here; fans of the retro FF’s will love all the different special abilities they’ll discover as they switch up their heroes’ role in battle. Mobius Final Fantasy must be seen (and played) to be believed.

Mobile MMO’s were once thought to be nothing but a dream. But these days, there’s been a nice flow of them coming through Android powered devices. One such example of that latest craze is a fantastical take on the sub-genre called MU Origins. With your custom Dark Knight, Dark Wizard or Elf, you’ll explore all types of fantasy locales and vie to become the strongest of them all. There’s an abundance of activities to constantly conquer, such as dungeon exploring, party raids and epic PVP combat. Upgrading your warrior is just as fun as getting into the more active parts of the game. The graphics are impressive, so you’ll never have to worry about dealing with ho-hum graphics that are tied to awesome gameplay. MU Origins looks just as phenomenal as it plays.

Bandai Namco has been churning out a wealth of quality mobile titles lately. They’re continuing their mean streak with this mix of dungeon crawling and fortress construction within Fortress Legends. This top-down action RPG lets you squad up with three trusted allies to lay waste to other players’ fortresses. After you successfully destroy these numerous dangerous forts, it’s up to you to build up one of your own and include the right defensive elements to keep it intact. Properly becoming a legend means having to defeat all types of mystical threats and making sure your fortress is simply too tough to conquer. Make sure you “git gud” at Fortress Legends. 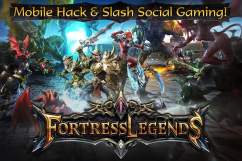 Our final selection is a pretty bright and whimsical take on match-three puzzlers/card battlers. Primal Legends puts you in command of an army full of anthropomorphic heroes who must defend Theria from all types of threats. You’ll have to think and act fast as the battles move in real-time and require you to take advantage of your heroes’ special abilities. With over 200 puzzles to wade through, you’ll have plenty of chances to pull off game winning combos and amass new heroes with even more powerful skills. Primal Legends pulls off its mix of genres in the best way possible. 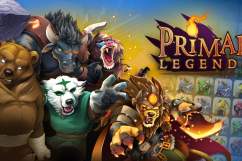 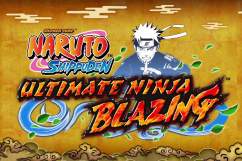