If you thought the internet frenzy caused by yesterday’s Red Dead Redemption teaser image is going to die down, think again.

This morning, Rockstar Games took to their social media to release yet another teaser for what appears to be an impending Red Dead Redemption-related announcement.

This time, we’re teased with more than just a logo and the color red, as the image features seven cowboy-esque figures silhouetted in the distance against the horizon. In typical Rockstar Games fashion, no words were associated with the teaser image, which helps to create frenzied discussions among gamers as to whether this is a brand new Red Dead Redemption 2 or a next generation redux of some sorts. Of course, either one of those options would be welcome.

Interestingly, the vibe I’m getting from the teaser image is that the new Red Dead could be multiplayer-focused (why else would the first teaser include seven cowboys and not just one?) That’s purely speculative at this point, but it’s certainly an interesting thought.

With two separate teasers in as many days, we have to assume that a major Red Dead reveal is also on the horizon. Hopefully, we’ll see a full reveal at some point this week, as we can’t wait to see what Rockstar has in store for the Red Dead franchise on the Xbox One and PS4.

For more of the latest gaming news, stay tuned to Heavy.com. 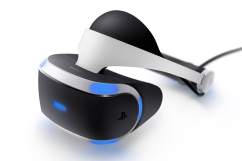