The official Pokemon Twitter account released a YouTube video confirming the Chinese leak and the demo data mine. The names for the final evolutions of the starter Pokemon are: Decidueye, Incineroar, and Primarina.

The official Pokemon website has been updated with the info on each of the final starter evolutions.

Decidueye is the “Arrow Quill Pokemon” and is the first ever Grass/Ghost-type.

Incineroar is the “Heel Pokemon” and is Fire/Dark-type. A heel refers to a type of wrestling in professional wrestling that is scripted to be “the bad guy.”

Primarina is the “Soloist Pokemon” and is the first ever Water/Fairy-type.

Also revealed were the rest of the Alola Island Guardians. They include: Tapu Lele, a Psychic/Fairy with the ability Psychic Surge, Tapu Bulu, a Grass/Fairy with Grassy Surge, and Tapu Mini, a Water/Fairy with Misty Surge. Each of these abilities sets their respective elemental Terrains. The Psychic Terrain blocks Priority Moves, like Sucker Punch, from being used.

A unique Z-Move, Guardian of Alola, is also shown being used by the Island Guardians.

A new Pokemon, Cosmog, is also revealed. It is rumored to be a pre-evolution to Lunala, the legendary Pokemon of Pokemon Moon.

The Alolan Persian is also officially revealed in the trailer. To see images from the demo data mine showing Alolan Geodude, Diglett, and more, click here. 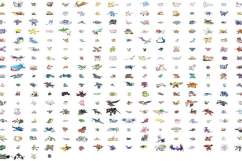 Full ‘Alola PokeDex’ Leak: What Can be Caught in ‘Pokemon Sun & Moon’? [PIC]