NYCC 2016 tends to get extremely exciting once Saturday rolls around.

Huge announcements about the biggest franchises in geek culture start to hit the web, which sends fans into a frenzy. Today (October 8), Bandai Namco did just that for its major fighting game series and a group of “Mighty Morphin” teenagers. Firstly, let’s get to the big character reveal for Tekken 7. In 2017, Miguel Caballero Rojo will make his return to the “King of the Iron Fist Tournament” and try to get his revenge on Jin Kazama. Miguel now joins the rest of the newly announced entrants in Tekken 7: Akuma, Lee Chaolan/Violet, Master Raven, Nina Williams and Bob.

His official announcement trailer (which can be viewed below) showcases his street brawling style against the very man he despises so much:

Tekken 7 – PS4/XB1/PC – Miguel (Character Announcement Trailer)Welcome back, Miguel! The rebellious Spaniard has returned for Tekken 7 to continue his quest for revenge, looking for those responsible for his beloved sister's death. Like us: facebook.com/tekken Follow us: twitter.com/tekken Visit us: tekken.eu2016-10-08T09:34:06.000Z 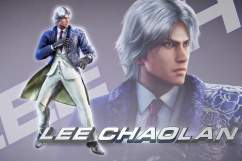 Now let’s discuss all the surprises that came out of the Power Rangers camp.

A new side-scrolling, beat ’em up game is arriving in January 2017. This upcoming release (entitled Mighty Morphin Power Rangers: Mega-Battle) will harken back to the original run of the popular 90’s TV show. Fans will be extremely pleased to know that they’ll get to choose from one of the five masked saviors and play through stages based on episodes from the show’s 1st two seasons. Local co-op has been confirmed and this title will be playable on the Xbox One, PS4 and PC platforms.

You can see the game and its cool cartoon visualization in the trailer posted below:

Now here comes the biggest Power Rangers news of all: we FINALLY got a teaser trailer for the March 24, 2017 reboot film.

We have that trailer for you all to see, which features a slew of new teens who now adopt amazing powers in their human form. That’s major change from the original show’s way of doing things, but we’re always welcome to change. For a few brief seconds, we see just how these superheroes morph into their new metallic super suits. The film stars Elizabeth Banks as Rita Repulsa and Bryan Cranston will actually play the part of Zordon.

The official description for the movie can also be read down below:

SABAN’S POWER RANGERS follows five ordinary teens who must become something extraordinary when they learn that their small town of Angel Grove — and the world — is on the verge of being obliterated by an alien threat. Chosen by destiny, our heroes quickly discover they are the only ones who can save the planet. But to do so, they will have to overcome their real-life issues and before it’s too late, band together as the Power Rangers.

Read More
Entertainment, Games, Movie Trailers, PC Games, PS4, Xbox One
NYCC 2016 is in full swing! For those of you who want to hear about the video game related announcements, we're here to do just that.