The Pokemon Sun & Moon demo released today will add new features on specific dates until the official release of the full game. Find out all the dates and in-demo locations of the upcoming releases here.

It was also shared that the newly leaked Ultra Beasts have nearly identical human forms with NPCs in the game. View the comparison chart here.

Just in case you wanted to know/didn’t know, the demo evolves over time. It’s all said in the demo itself, but if you don’t want the hassle of remembering it, just remember this thread
– On 10/19 a guy outside the pokémon center will give you something
– On 10/23 a lady in the left corner of the town in the demo will do something
– On 10/30 an old man inside the Town hall celebrates his Pikachu’s birthday, and he asks you to celebrate with him
– On 11/5 a policeman standing on the pier will do something (probably related to team skull, dunno)
– On 11/11 a girl in the ferry terminal is leaving and wants you to say goodbye to her. 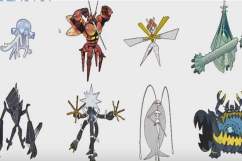