Summer blockbusters are always a riveting endeavor. This year’s hottest films gave us a bunch of explosive thrills that we’re sure to never forget.

If you still have a taste for big guns, powerful Gods, badass female criminals and sharks, then these Android games are ready made for you. Every month, we arrive with a number of high quality playable experiences that make the Google Play store an important destination. So we made sure to collect the five most riveting action games that are full of exciting situations. We’re sure you already checked out our top five Android games for the month of September 2016 that won’t cost you a dime.

So let’s cut the chit chat and count down our picks for our top five Android action games for September 2016.

Did any of you happen to play this 2D side-scrolling shooter on the PS4? It meshed together the retro visuals that looked awesome in Scott Pilgrim vs. The World and the shoot ’em up carnage from the Contra series. You’ll get the most enjoyment from this awesome take on 80’s run & gunners on your big screen since it’s ready made for the Android TV platform. Mercenary Kings is chock full of frantic battles against all sorts of baddies, plus you’ll get to manage your own squadron of mercenaries who build anything/everything. The mazes you’ll explore are spread out over hundreds of missions, so make sure you’re prepared to complete them all (especially with three other buds). There’s plenty of slick knives and guns on hand here to dominate in Mercenary Kings.

2. Fury of the Gods Tango

As an all-powerful God, you’re forced to use your mighty powers upon a population of non-believers. Fury of the Gods Tango is a tower-defense struggle that gives you the abilities tied to one of three playable Greek gods. Zeus, Poseidon or Hades will be under your control as you strike down the heathens that look to tear down the temples that praise you. The majestic displays of power look amazing and you’ll truly feel unstoppable as you reign down pain with just finger taps. It feels good to smite those who disrespect you, especially when you can do it all from the Heavens above. STRIKE DOWN UPON THEE WITH FURIOUS ANGER!

Remember those skinny faceless figures you used to draw on hundreds of looseleaf paper? Chances are you equipped them with assorted weaponry and drew them facing off in climactic battles. League of Stickman 2016 brings those dream scenarios to life within a melee-focused foray into a dark world. Athy, Feist, Zilong, Monk and several other stickman fighters are capable of pulling off plenty of slick looking maneuvers that make you feel like a true combat master. Slaying all types of beasts and finally confronting the boss is an old school path to gaming’s form of resolution, which is present here and accounted for. This one’s really packed with enough high-paced action to keep you captivated.

We’re still shocked at the fact that there still hasn’t been a mainline GTA entry that’s featured a female protagonist. While we can’t go for illegal joyrides as a lady in Rockstar’s blockbuster franchise, we can act out that dream scenario on mobile devices. Crime Queen Mad City Simulator is the type of game where you try to raise all types of hell as a female felon. Your crime rate raising chick can throw hands with the best of ’em, take out her enemies stealthily and shoot/blow up anyone who crosses her. In this game’s mad city, you reign supreme as the sole queen of crime.

Sharks are always hungry for a piece of meat. Well more preferably, meat of the human kind. As a shark hunter, your duty is simple: defend all the jet-ski riders you spot in your crosshairs and blast away all the sharks tailing ’em. From a high vantage point, you’ll need to master your sniping skills quickly because there’s a wealth of sharks to take out. You’ll be armed with all sorts of firearms (the AK-47, 9MM, MP5 etc.) and keep a close eye on the beautiful sea landscapes you’re trusted with protecting. Shark Sniping 2016 is a simple FPS that manages to provides all the thrills you’d expect from a game that includes bloodthirsty sharks. 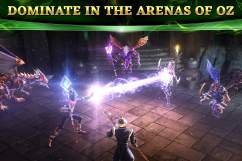