Microsoft has announced November’s upcoming Games with Gold for Xbox Live subscribers, and it contains some great games.

For Xbox One owners, you’ll be able to play Super Dungeon Bros. for the entire month of November. Secondly, starting on November 16th, Murdered: Soul Suspect will be available, and you’ll be able to download it until December 15th.

Super Dungeon Bros. is a promising indie title that has a Castle Crashers meets dungeon crawler feel, where you’re able to team up with friends (locally and online) to take on various dungeons. Of course, Murdered: Soul Suspect wasn’t exactly the most well-received game on console, receiving a 51/100 on Metacritic. But, apparently, the Steam version is very well-liked, as it holds a high 9/10 from over 5,000 reviewers. The variance is super odd, and you’d have to imagine that the difference is a result of some sort of bug/release quality on Xbox rather than the game’s content itself.

As far as Xbox 360 games are concerned, the November Games With Gold promotion includes Monkey Island: Special Edition from November 1st-15th, as well as one of the best DLC games of all time, Far Cry: Blood Dragon, which will be available from November 16-30th.

Monkey Island: Special Edition is a hilarious swashbuckling adventure game that originally released in 2009, and still remains with an 88 Metascore. Far Cry: Blood Dragon, on the same token, is also generally viewed in a positive light. In fact, I’d call it one of the best DLC offerings of all-time, as it took the general Far Cry 3 formula and flipped it on its head with a wacky 80s neon sci-fi theme.

You can find more of the latest gaming news at Heavy.com. 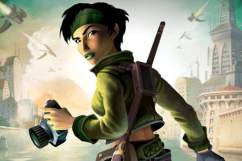 Why the New ‘Beyond Good and Evil’ Is Taking So Long