The Wayne Family legacy has been tarnished. Gotham City is now under the authoritarian rule of a psychologically broken mayor. And Bruce Wayne has become a resident of the most dangerous insane asylum in Gotham. The closing moments of the last episode in Telltale’s Batman series answered the biggest question of the plot (Who’s behind the mask of the Children of Gotham’s maniacal leader?). Now with “Guardians of Gotham,” we get to experience an incredibly compelling interlude before the final episode of the 1st season.

Bruce Wayne’s been hit with a severe dosage of the Children of Gotham’s dangerous serum. After coming to, he finds himself in the worst of situations now that he’s a patient of Arkham Asylum and even more worse for wear. His brutal attack towards the new figurehead behind his company has been seen by the people of Gotham, which causes his public image to plummet even more. All of these occurrences play a huge part during this episode’s big introduction. What makes Bruce’s brief stay within Arkham Asylum’s walls so surprising is his encounter with one of the most popular comic book villains of all time. It’s even more enjoyable when you get to interact with a few more of Batman’s most villainous foes. The “Clown Prince of Crime’s” dialogue and the “gifts” he offers to Bruce will truly test your sense of right/wrong. Telltale truly knocked it out of the park as far as this episode’s beginning is concerned.

Once Bruce is free from the confines of Arkham Asylum, events spiral out of control in the best way possible (well, for us). Stepping into the role of Batman has been one of the most amusing elements of this series and his implementation here is a even more awesome. The major crime scene you come upon brings a ton of answers to those who’ve wanted more info behind “Lady Arkham” and her upbringing. Tons of revelations arise during this portion of the episode and it gets even more out of hand (in a good way) when you find out who’s been tampering with your tech. The choices presented to you hit hard and the outcomes of each one make it feel so. Dealing with Harvey Dent as Bruce/Batman and deciding to defend Wayne Manor/put a stop to Oswald Cobblepot’s tech hacking scheme will throw you into some truly heart wrenching occasions.

This series is already known for giving you QTE fight sequences, which have been pretty entertaining thus far. The big brawl you can choose to have with The Penguin happens to be the best hand-to-hand encounter we’ve participated in thus far. The lead up to this big face off builds everything up perfectly, but choosing to go fend of Dent’s hired guns at your mansion feels just as gratifying to play. The only disappointment that flares up during this chain of events are the audio issues. There were instances where Batman brutally punched a foe in the face, but the satisfying sound of a jaw being broken just never came. Examples of this issue popped up more than once, actually.

“Guardian of Gotham” has us so ready to see the conclusion of this Telltale Batman tale. Bruce’s continued fall from grace places him into some situations that we’ve never seen him deal with before. This episode introduces more of Batman’s standout foes (one “Clown Prince” in particular), makes you choose between some incredibly heart-wrenching options and shows you the continued development of Two-Face. We got a kick out of this entry’s CSI sequence and combat affairs, but the technical audio issues that popped up during those battles are hard to ignore. And the fact that we weren’t given just a lil’ peek at what’s next is a heartbreaker. “Guardian of Gotham’s” overall story still manages to shock and awe, though. 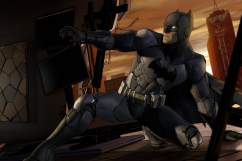