Arc System Works deserves a round of applause. When they stepped away from the Guilty Gear series for a while, they transitioned perfectly into developing a fighter that’s just as incredible. BlazBlue’s been around long enough to garner its own fanbase and separate itself from the Guilty Gear comparisons thrown its way back in ’08. The time has come for this fighter to close the book on an ongoing saga full of twists and turns. BlazBlue: Central Fiction delivers a finale that’s packed with everything that brought it to greatness up until this point and so much more.

Everyone that got introduced to the franchise since its birth is accounted for here, but what truly stands out in this release are all the new roster additions. Naoto, Hibiki, Izanami, Nine and the rest of the DLC cast members are incredibly fun to use. Nine and Izanami play the role of ranged combatants who can punish from long and mid-range. Naoto is a brutal melee-focused fighter who can destroy anyone who falls victim to his rushdown offense. Es and her huge blade provide a nice alternative to the other sword wielders in the game thanks to her heavy use of trap setups. All 35 characters manage to cater to different playstyles and give longtime fans a reason to return to this upgraded installment.

BlazBlue: Chrono Phantasma Extend already had a substantial amount of modes. Thankfully, Central Fiction doesn’t do away with any of them and actually throws in something new to busy yourself with. The basic Practice, Story, Battle, Network, Collection and Options mode selections fill out this entry, plus the new Speed Star mode is a fun diversion for Time Attack mode fans. From a purely gameplay mechanics standpoint, Central Fiction makes some welcome system balance adjustments.

Newcomers and masters alike will appreciate the fact that a countdown meter lets you know how much “Overdrive” mete you have left. Along with that change up, the Exceed Accel special attack and Active Flow strength booster make fights even more of a flashy affair. Getting a boost in power due to your offense-heavy playstyle does even more to make BlazBlue’s mechanics so unique. The Tutorial Mode is a must for everyone and we’re glad it does a great job of covering the basics right on down to the most difficult terms to wrap your head around.

The Story Mode implemented here must be complimented for two reasons: its beautiful anime/manga presentation and tightly woven dialogue. However, sitting through such extended text heavy cutscenes is far from entertaining within the confines of a fighter. This is an issue that’s also hard to overlook in the Guilty Gear Xrd games that have recently hit current-gen consoles. There’s a good tale being told here, but you’d much rather turn to the Arcade Mode structure instead. There’s more to actually play, plus the plot elements that come into play there are short and sweet. Some characters have up to three quick Story arcs to complete, so Arcade Mode will definitely be your go-to mode.

Story Mode just has too much to digest and it’s a chore to sit through after hitting the X Button over and over. What also sticks out as an issue in Central Fiction is the absence of English dubbed voices. Not having that option in place anymore is not a major problem, but it’s a problem nonetheless. Hopefully, Central Fiction adds in those English voices as DLC to make this game feel truly complete.

BlazBlue: Central Fiction is an excellent gift that’s perfect for those who stood by this 2D fighter since its introduction. New characters, modes, system adjustments etc. come together to make this series swan song a memorable one. This fighter features everything seen in most modern day fighters, plus it throws even more features in to put it above the competition. The lengthy Story Mode’s text-heavy sequences may look fine, but they’re simply too much of a bore to get into. And the loss of English voiceovers stings a little bit. Props still go out to Arc System works though for their fine farewell project within the BlazBlue lore. 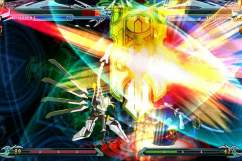