Left 4 Dead’s impact on modern gaming is enormous. One of the best FPS shooters to ever grace consoles and PC let everyone live out their fantasies of surviving a zombie apocalypse alongside their three best friends. It just so happened to be more of a dream and less of a nightmare because you all fought for survival with an armory full of “toys.” That formula has obviously influenced the development of Tripwire Interactive’s survival FPS, Killing Floor 2. It’s easy to point out the similarities between both games, but it’s also evident that the end result we’re about to review stands out with its own take on the formula.

So what you’re set out to do is quite simple: you and three other survivors choose from numerous character classes, which determine your passive abilities and initial loadout. After performing all the customizing tasks you can, it’s time to step onto any of the game’s varied maps and kill some Zeds (Killing Floor 2’s mutated horrors). The assortment of weapons, classes, Zeds, playable characters and maps you can choose from are impressive. There’s the usual offering of stages pulled straight from your usual B-horror film: bright medical facilities packed with gruesome experiments and foggy farms are just a sample of what you’ll find running around. Killing Floor 2 adds so much more to the experience once the most metal soundtrack of all time blares up when Zeds come running your way.

Speaking of Zeds, they come in all disgusting shapes and sizes. You won’t just fight for your life against your usual zombie fodder; Zeds with blades for arms, grotesque baddies that shoot poison gas at whoever’s close and tyrants that don chainsaw boxing gloves all try to take your life. Spending time shooting, hacking ‘n slashing and bashing these Zeds to death is a good time due to the slick, fast-paced action. The random slow-mo moments that pop up when you pull off the perfect headshot or perform some other cool activity is always a nice touch.

After sawing through a set number of Zed waves, the difficulty hits another level when a boss comes for your heads. These super-powered Zed encounters do a good job of upping the challenge level and testing your team synergy. Trying your hardest to help your team eliminate an insane doctor with healing abilities is the ultimate test; thankfully, it always stays at a high fun factor level. Between each round, getting the chance to re-arm yourself and alter your loadout does a great job of calming the breakneck pace down.

It’s easy to enjoy this game during your first few hours spent with it. But, Killing Floor 2 can’t avoid heading into the doomed territory of repetition. This feeling pops up earlier than expected since there’s only two modes to participate in. There’s your usual survival horde mode and one that’s more competitive (one team takes on the role of Zeds who play from a 3rd-person POV). We wish there were more mode variations, such as the game’s own take on base defense or even some form of Capture the Flag. Here’s hoping that this FPS gets a lot more meat added to its blood soaked bone when it comes to a conglomerate of new playable modes.

Killing Floor 2 manages to stick to its formula well and deliver a mindless yet enticing FPS. Blasting Zeds never feels like some boring labor; it’s a time well spent thanks to the massive selection of stages and other elements on hand. Playing with your favorite character classes, making sure your character dons the perfect costume, pulling off the coolest kills ever etc. all equal an awesome time. Killing Floor 2 could have been even better if it threw in more distinctive modes and some fresher mechanics that keep the action from growing stagnant. Even with these complaints, Killing Floor 2 still supplies a lively time. 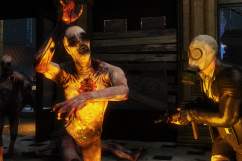 ‘Killing Floor 2’: Top 10 Tips and Tricks You Need to Know