Games that might not have wowed everyone on its 1st attempt at least deserve a 2nd chance. The original Assassin’s Creed was flawed in several ways, but its sequel managed to fully realize the greatness it promised beforehand. Watch Dogs was introduced to the world and it wasn’t everything it was cracked up to be, but it looks like the 2nd release in the series will finally show and prove. Titanfall was a very unique FPS and it garnered a ton of attention, but its lack of a meaningful single-player component and lack of substantial multiplayer content kept it from excelling. Now that Titanfall 2 is within our grasps, we came away pleased with Respawn Entertainment’s fully realized sequel. “Prepare for Titanfall.”

A lot of gamers (that includes us, of course) were weary of Titanfall 2’s biggest add-on: a single-player campaign. The 1st game included a few bits of storytelling within its wealth of multiplayer modes, but it wasn’t enough to truly make you care about Titanfall’s interplanetary skirmishes. Imagine our surprise when we came away from this sequel’s fuller campaign with plenty of praise. From a pure gameplay standpoint, everything feels even more amazing now that you’re moving, jumping, boosting and shooting as quickly and fluidly within the confines of a campaign that doesn’t overstay its welcome.

Jack Cooper and his Titan share some funny banter during their more quieter moments that thankfully pop up frequently. BT’s dry robotic responses are a lot funnier then they should be. The plot itself is pretty generic and the main baddie is a bit too over-the-top, but the platforming puzzles and varied missions are entertaining enough to keep everything a bit more absorbing. Stay for all the energetic gun fights, search out for all the Pilot helmets and enjoy the challenging Titan duels. But the main conflict itself? Ignore it and just pay attention to the convos between Jack and his trusty Titan.

Titanfall was mainly a multiplayer FPS; that’s where it made such a lasting impression on everyone who played it beyond its expired replayability factor. With Titanfall 2, everything that fans cherished becomes even more fleshed out. Old standby modes make their return, but there’s a collection of new ones that are just as superior. Bounty Hunt is one of the modes that changes up the multiplayer formula: players need to take down their opponents in order to amass as many points as possible in order to bank them and lead their squad to victory. Last Titan Standing is still the go-to mode since it lets you live out your fantasies of explosive battles between towering Titans with varied weaponry. Titanfall 2’s multiplayer has more legs and we’re sure it’ll live on a lot longer thanks to the promise of free DLC and so much more gear unlocks to deck your pilot out in.

The main attraction of Titanfall 2 of course are the mechanical warriors who make every battle that much more intriguing. With the presence of past Titans, the familiarity factor for fans of them is here and accounted for. But the latest batch of new Titans who’ll fall under your command introduce new ways to dominate the battlefield. Northstar, Ronin, Scorch, Ion and Legion are all amazing and conjure up all types of new tactics for veterans to become enamored with. Ronin’s close-quarters sword play and Scorch’s penchant for some “flaming” offense are just a few of the new abilities you can employ in multiplayer. With these new Titans comes new primary weapons and a larger amount of unlocks, so now your Pilot will have a better chance of standing out from the rest of the pack.

Titanfall 2 comes out during a very crowded FPS season, but make sure you don’t pass it up just because you’re too deep into the latest Battlefield and Call of Duty entries. Respawn has done an incredible job at including one of the more fun single-player campaigns produced in recent years. And its multiplayer feature set throws a lot at everyone, which means there’s way more life in this sequel over its predecessor. New Titans, weapons, gear and the same flexible maneuvers your Pilot employs all combine to make Titanfall 2 one of the best 1st-person shooters of 2016. 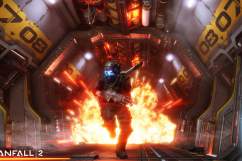