Man, 2016 has brought us so many great games, and if you’re an Xbox One owner, or buying a gift for an Xbox gamer, there is certainly no shortage of great Xbox One games to buy in 2016.

Sure, the 2016 year in video games has seen its fair share of controversy — mostly involving sketchy and dishonest marketing tactics — but that’s not going to stop us from finding joy in playing the hottest games of the year. While games like ReCore, The Division, and Mirror’s Edge: Catalyst were mostly disappointing, there have been numerous games well worth your (or your kids’) time. Video games make for some of the best gifts for boys and girls alike, and whether they’re racing fans, online soldiers, JRPG lovers or zombie slayers, there’s something new to buy them this holiday season. Here are the top 10 hottest Xbox One games of 2016 to make your shopping a bit easier.

Gears of War 4 is a console-seller for Microsoft, and many didn’t bother picking up an Xbox One until there was a brand new Gears of War game to play on it. Now, in 2016, Microsoft has finally released the first “next gen” Gears of War, and it’s certainly a big change for the franchise. The newest game brings numerous new characters into the mix, and each new character is wildly different. There’s still a heavy portion of “dudebroness”, but it’s not nearly as prominent as the game’s we’ve seen in the past. Gears of War 4 is a top-notch option, and it brings a grittier, darker, more horrific type of Gears that many fans will enjoy.

If you’re a racing game fan, the Xbox One not only has Project CARS and Forza Motorsport 6, but just a couple months ago, Microsoft released the next iteration in their more-arcadey franchise, Forza Horizon 3, and it’s one of the best racing games we’ve seen yet. In fact, it doesn’t go too arcadey, like say a Burnout Paradise, but instead, it takes an interesting mix of simulation and arcade and meshes them together, so that gamers get an extreme level of customization but without the headache of having to repair your car every few minutes. And, it’s set in an open world, so you can just aimlessly drive your cool rides to your heart’s content.

Official Call of Duty®: Infinite Warfare Reveal TrailerCall of Duty®: Infinite Warfare returns to the roots of the franchise where large-scale war and cinematic, immersive military storytelling take center stage. Prepare for a gripping war story in which players fight against the Settlement Defense Front to defend our very way of life. Take Command on November 4. Pre-order the Legacy Edition or…2016-05-02T10:05:14.000Z

I won’t deny the controversy surrounding Call of Duty: Infinite Warfare, but if you ignore the fact that it’s a Call of Duty game, it’s a much more enjoyable experience. Sure, it’s ultra heavy on the sci-fi, which many longtime fans of the franchise aren’t exactly stoked about, but if you love the idea of warfare set in a sci-fi world, you’ll love Infinite Warfare. I’ll also note that it’s not about shooting hyper futuristic lasers or going into hyperspace or anything like that, and it’s surprisingly grounded. The multiplayer is fluid and there’s a lot of depth to it, thanks to the ability to craft guns and unlock new gear and guns.

Let’s ignore the fact that the original Titanfall game that released two years ago was a hot mess, because Titanfall 2 is an entirely different game. Titanfall 2 is actually going to be in the talks for the game of the year conversations at the end of December, and with good reason. The multiplayer is high octane and fluid, and those who seek the thrill of controlling a mech — I mean Titan — will have a lot to enjoy. And then, there’s the campaign, which wasn’t a part of the original Titanfall offering. But the new Titanfall 2 campaign is incredible, and it’s not phoned-in like you might expect. It’s formidable, and it’s just another reason why Titanfall 2 has become one of the hottest Xbox One games of 2016.

Overwatch Cinematic TrailerFight for the Future: playoverwatch.com In a time of global crisis, an international task force of heroes banded together to restore peace to a war-torn world. This organization, known as Overwatch, ended the crisis and helped maintain peace for a generation, inspiring an era of exploration, innovation, and discovery. After many years, Overwatch's influence waned…2014-11-07T20:15:32.000Z

Denying Overwatch‘s popularity and relevance is a major mistake, as it is easily, hands-down, the best new multiplayer game of 2016. And yes, that includes Call of Duty, Battlefield 1, and even Titanfall 2 — all of which I love and consider to be great games. But Overwatch is on an entirely different level, and it has just reached over 20 million active players. Although the game has been out for over six months already, its popularity is only growing. This month, Blizzard is adding all new modes and yet another new character — Sombra — into the mix.

Before buying it for someone as a gift, though, you might want to make sure that they don’t already own it — which is a major possibility. If they don’t own it, I highly recommend you pick it up for them, as it’s probably THE hottest Xbox One game of 2016.

Battlefield 1 Official Reveal TrailerDiscover classic Battlefield gameplay with epic multiplayer and an adventure-filled campaign. Experience the Dawn of All-Out War, Only in Battlefield 1. Battlefield 1 will be available from Oct 21st, 2016 on Xbox One, PS4 and PC. Subscribe and be the first to see BF1 gameplay videos: bit.ly/270eMcA “Seven Nation Army” by The White Stripes (The…2016-05-06T20:14:49.000Z

Battlefield 1 has taken the Battlefield franchise up a notch, and it’s the best game the franchise has seen yet. It’s set in World War 1, and its combat style is much more visceral than the games we’ve seen in the past. Sniping with a bolt-action rifle is the most satisfying multiplayer experience we’ve had in awhile, at least when it comes to war shooters. The maps are all expansive, and each map simultaneously caters to all different playstyles. So, whether they’re a sniper, a run and gunner, or someone who loves to jump into tanks or planes, they can find enjoyment regardless of what map they’re playing on. It’s been awhile since we could honestly say that we recommend buying a Battlefield game, but Battlefield 1 appears to have the legs that the past few games have not had.

Final Fantasy XV – Omen Trailer (North America)“Omen,” a short CG movie by Digic Pictures, inspired by FINAL FANTASY XV. A rapidly shifting world, enemies that appear endlessly, gradual loss of abilities… And a madness that brings harm to the beloved fiancée. This short movie, which can only be described as a nightmare for the struggling Noctis, is a collaboration between FINAL…2016-10-27T14:00:02.000Z

Here we are, in the middle of November, in the home stretch in regards to the next Final Fantasy game. Soon, Final Fantasy XV will release, and the early opinions and impressions around the web are all saying that it’s an impressive game. Square Enix has had this game in development for quite some time, and fans of the longstanding franchise are eager to get their hands on it. The game appears to be a modernization of the franchise, especially when you factor in the addition of a flying car. We’ve also heard that it has a strong focus on camaraderie and “the power of friendship”. It’s also intended to bring in new fans to the franchise who might have skipped it up until now, which is one of the biggest reasons it’s going to be one of the hottest Xbox One games this year.

Killing zombies will never get old to me, and I’ve been slaying zeds since the SNES days with Zombies Ate My Neighbors. In 2016, zombie culture is still super relevant, and Dead Rising 4, the Xbox One and PC exclusive, will give players their zombie fix. It looks wholly ridiculous (in a good way), with protagonist Frank West returning to use anything he can as a weapon to fight-off the undead. There’s an all-new collection of weapons and vehicles that will allow the player to craft their own tools, and we’re anxious to see who can craft the most ridiculous weapon.

Dishonored 2 will not only let you play as game 1’s protagonist, but it’ll also allow you to play as Emperor Emily, and that’s going to be a major draw for many potential fans of the franchise. In our eyes, Bethesda can’t do much wrong when it comes to the game’s they’ve released, and Dishonored 2 appears to have the stealth genre down.

Watch Dogs 2 Trailer – Welcome to San Francisco Gameplay | Ubisoft [NA]For Marcus Holloway, the San Francisco Bay Area is his playground. From Marin to Oakland to Silicon Valley to the City, the neighborhoods and people are as diverse as the activities dotted everywhere in the Bay Area. Watch the “Welcome to San Francisco” Trailer and take in all of the sights, sounds and action that…2016-10-24T16:00:07.000Z

The original Watch Dogs was a hot mess, and I’ll be the first to admit that. But Watch Dogs 2 appears to be on an entirely different level. Sure, we’ve been duped by Ubisoft’s marketing before, but I think Ubisoft has learned from their mistakes this time around. The Watch Dogs 2 gameplay we’ve seen so far also appears to be much closer to what the original was supposed to be, with the new protagonist being able to hack way more things. The new game will take place in an open world San Francisco, and the footage we’ve seen so far looks incredibly well-done. Ubisoft promises a much more formidable experience than its predecessor, and here’s to hoping Watch Dogs 2 can live up to its hype this time around. 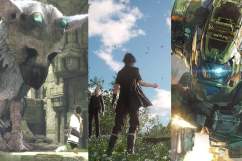