During the first day of CapCom Cup 2016, the 32 best Street Fighter players in the world went head to head with only eight moving on, and there were some major surprises to say the least.

Eight players will be heading into the second and final day of the tournament, which will last three hours and begin at 6:30 p.m. Pacific Time on Saturday, December 3rd. On day one, matches were best three out of four.

The show began to shock right away with Infiltration, the player who gave the best performance this season, losing the very first match of the show. He ended up coming in 25th place, a surprising development considering that he placed first at Evolution 2016 and won CapCom Cup just three years ago.

Tokido, a player who was considered to have a serious shot at the first place prize, also placed 25th.

Here are the rankings at the end of the first day of CapCom Cup:

And the top eight players, who will be going on to day two and competing for the top prize, are:

Whichever one of those eight players can place first tonight will take home over $120,000 in prize money. Who will emerge victorious and be declared the Street Fighter V world champion? We’ll find out tonight starting at 6:30 p.m. Pacific Time. 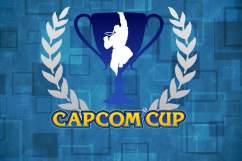