Super Mario Run, the first Mario platformer game for mobile devices, has received mixed reviews in part because it does not contain as much content as players had hoped. Might Nintendo release additional levels or game modes in the coming months?

Don’t get your hopes up. A Nintendo spokesperson told The Wall Street Journal today that the company does not plan to release any more content for Super Mario Run at all, paid or unpaid. Apparently, what comes with the app right now is all there will ever be.

This comment is seemingly at odds with the fact that several Christmas-related items just hit Super Mario Run, which would seemingly qualify as new content. However, that representative probably meant that Nintendo isn’t developing anything new but that they might release some content that was developed along with the main game and that they held off on releasing until later, i.e. Christmas decorations.

This may come as a surprise to gamers who thought that Nintendo might treat Super Mario Run like Pokemon Go, the mobile game that has received frequent updates ever since it launched back in July. With that game, fans have been given new Pokemon, features, and special holiday-related events at least once a month if not even more often. Based on that Wall Street Journal report, don’t expect any of this with Super Mario Run, and that is something that may turn some gamers away from purchasing the app in the first place.

After all, Super Mario Run costs $9.99, and it features only 24 levels that can easily be cleared in one sitting. There’s also a mode called Toad Rally, where players compete with others to collect the most coins and perform the most impressive moves. In theory, you will also replay levels in order to collect all of the coins, but it’s up to gamers if this is enough to justify the price tag or if that is not enough content.

So far, many gamers are concluding that Super Mario Run isn’t worth the money, as it has received many negative user reviews and currently holds an average rating of 2.5 out of 5 stars on the App Store. Nintendo’s stock also fell about 15 percent over the past several days, although the game was still able to receive 5 million downloads in the first 24 hours, according to CNET.

At this time, Super Mario Run is only available for iOS devices, though it’s expected to make its way to Android sometime in 2017. 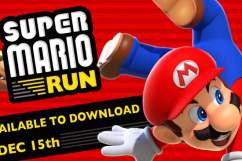