Thanksgiving is a fulfilling (literally) holiday that we always look back on fondly after it’s done.

But as soon as we were done smashing a plate full of home cooked delicacies, we hobbled to the nearest couch and spent some time playing mobile games. As a matter of fact, we got our post-holiday fun from these new Android games. DC’s greatest heroes/villains returned for a new mobile RPG, Lucha Libre wrestlers bounced around our screen, we hit the road in awesome vehicles and accomplished so much more. November 2016’s Android game picks are more than enough for anyone looking for new mobile experiences to cherish.

We’re now here to present you with our selection of the most fun (AND FREE!) Android mobile games that launched in November.

The “Blackest Night” storyline provided one of DC’s finest tales and the return to mainstream prominence of Green Lantern. Now it’s available in playable mobile video game form with the arrival of a new DC Comics RPG. We’re pretty shocked to see it take so long for this type of game to come out (Star Wars, Marvel Comics and other popular properties have done the same thing with their characters), but we’re glad it’s finally here. DC Legends (not to be confused with the great CW TV series) lets you build a party full of the best DC heroes/villains and send them out to do your bidding. Nekron, the Manhunters and a host of other baddies must be defeated in turn-based battles, plus you’ll need to improve your characters’s abilities in order to make them capable of winning them. If you always wondered how The Joker, Wonder Woman and Dr. Fate would fare as a team, then this game is right up your (heroic) alley.

You know what retro cartoon we remember fondly? Mucha Lucha…MUCHA LU-CHA! It was a jolly good time watching a a bunch of young luchadors act out their weekly adventures. Ever since we became fans of that show, we’ve become enamored with the world of Mexican professional wrestling. Burrito Bison: Launcha Libre is an insane endless runner/leaper that gives us our lucha libre fix. You can choose from three powerful wrestlers and then launch them high into the air so they can tear up an evil chef’s edible army. The animated visuals look impressive, the action that takes place in the ring/air is bone crushingly impressive and there’s finally an intimidating final boss for you to save the world from. Burrito Bison, Pineapple Spank and El Pollo all need your help, so download this one ASAP!

There’s such a crazy offering of racing games geared more towards monster truck fanatics. The one that was a big hit with us for the month of November was Gameloft’s latest release, Asphalt Xtreme. The varied track selection that’s available for you to shred dirt and race through rain on lets you do so with different truck types. Your digital garage will become packed with all manners of Muscle Cars, Buggy, Pickup, Rally Car, SUV or Trucks. The vistas you’ll race on are beautiful, the multiplayer component is forever fun and you’ll never grow tired since Asphalt Xtreme is jam packed with modes. This mobile racer stands ahead of the pack.

Bandai Namco’s been known for porting their most memorable arcade hits to mobile. Pac-Man and a few more of his 80’s retro gaming contemporaries have been given a new lease on life. We’re pretty pleased to see that the alien bug squashing shoot ’em up known as Galaga has received the very same treatment. Galaga Wars brings back that addictive bug hunting in space action we’ve all come to love. All those Bees, Butterflies, Scorpions and that ship capturing Mother Galaga are all here and more dangerous than ever. There’s no need to worry though since your trusty ship can wipe them all out with twin ship assists and a plentiful weapons arsenal. Galaga Wars appeals to old school gamers and new ones alike.

King Arthur the Ruler of Avalon has been cubed! And we never thought we’d say this but…WE LOVE HIS NEW BLOCKY FORM! In Cube Knight: Battle of Camelot, you step into the armor and protective boots of a legendary hero who must seek out the most powerful of weaponry. There’s a hard road ahead for those who wish to claim the Holy Grail, but at least the journey getting there is fun. You can fight as King Arthur or the other Knights of the Round Table, adopt different character classes, equip legendary weapons, battle countless foes in the Coliseum etc. All these tasks feel great and look even sweeter thanks to the cool pixel graphical presentation. The Island of Avalon must be your next mobile destination! 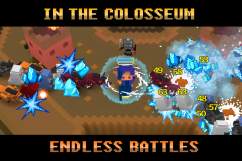 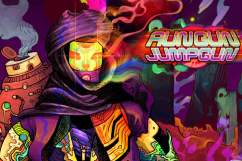