Update: the new reveal that dropped during this livestream was the debut of Robin. You can check out his trailer below.

Netherrealm Studios tends to be pretty open with their community of fans. Before and after their smattering of DLC support for Mortal Kombat X, the development studio constantly posted up live streams that delivered info on their latest fighter. It looks like that trend will continue with Injustice 2. This latest “Watchtower” live stream presentation will undoubtably provide us with new details on the game’s deeper mechanics. We’re prepared to see and hear more about the armor customization system and the game’s plot. Plus, we have a feeling that we’re going to get a sneak peek at one of the game’s newest roster additions. Chill out with us right here as we find out what’s coming next from Injustice 2. 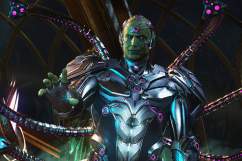