2016 was stressful as hell, but at least it awarded us with a bunch of games to relive our pent up frustration. Not only were there tons of awesome home console and portable games to consider playing, there were also several mobile games that piqued our interest. Over on the Android side of things, a solid amount of quality action games launched in the final month of the year. After sampling each and every one of ’em, we came away impressed with five unique action titles that are worth the free/paid download. We never steer you wrong when we recommend the best of the best, right?

The wide, wide world of virtual reality blossomed in 2016. Three major headsets arrived across the PC/home console landscape and welcomed everyone into more immersive experiences. The very same thing happened over on mobile devices. The EVE inspired space shooter Gunjack 2: End of Shift placed gamers in the pilot seat for some intense dogfighting in the Outer Ring of New Eden. The graphics looked even more impressive if you had the means to explore its interpretation of deep space in VR. The storytelling elements are surprisingly solid and the thrill of space battles never grows dull. Gunjack 2 is a definite high mark for mobile VR.

Catapulting birds into pigs is a cute and cuddly time well spent. However, Super Toss The Turtle is a blood-splattered chaotic affair. And we love it a lot more than those darn Angry Birds! Your helpless turtle is nothing more than a far-reaching projectile when launched from long distances. The fun comes from utilizing a wealth of power-ups to send your turtle much farther than your last distance record. Gadgets such as jetpacks, nukes and cannons give you more meters to pass and more weird characters to get a better look at. Plus you’ll eventually unlock new victims…wait, we mean “participants” for your brand of super tossing fun. Super Toss The Turtle looks just as insane as it plays.

There’s Smashy Road: Wanted. And now there’s a game that improves upon the foundation laid by that game by adding in online multiplayer. Smashy Road: Arena still contains all the “last as long as you can” car getaway action you played relentlessly before. The feds and even the army are right on your tail, so you’ll have to command 30 customizable vehicles and dodge ’em all at every turn. Of course, you can blast your opposition to shreds throughout a bevy of blocky stages. With the added presence of a playable online multiplayer mode, Smashy Road: Arena ups the ante for its brand of on-road anarchy.

As avid dungeon crawling RPG fans, we grew fascinated with how great the last two Demong Hunter games turned out to be. Our leveled-up chibi mode looking Hunter had to navigate a virtual world and get rid of its monster problem. The 3rd romp through dangerous, creature filled caverns adds more weapons, costumes, special powers and everything else needed to keep your Hunter intact. The graphics themselves might make you consider it nothing more than a cute and cuddly good time, but it’s so much more than that. Demong Hunter 3 is powered by fast-paced swordplay, addictive loot collecting and team-based dragon battles.

The Iron Avenger created by Bad Wolf Games is new and improved. Iron Avenger Origins taps into the superhero power fantasy that many gamers wish to fulfill with an action-packed blast ’em apart game. The frenetic waves of mechanical baddies that flood your screen need to be wiped out. As the Iron Avenger this game is named after, you’ll shoot off missiles, fire off machine gun rounds, take flight and upgrade your suit for further missions. There’s also the chance for players to switch to other cool looking iron suits, so you can save the world in style. Iron Avenger Origins feeds off of the Iron Man concept and delivers it in mobile game form. 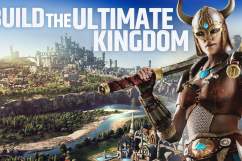