While there isn’t a whole lot of direct physical contact going on in Lethal League, you’ll still have a hell of a time knocking a vicious fastball into your opponent. What we have here is a projectile-based fighter that’s all about smashing an anti-gravity ball all over the arena. As you lay into it with harder strikes, the ball gains even more momentum and becomes that much harder to dodge. The intensity of each match centers on both characters’ ability to make that anti-gravity ball bounce at higher speeds and move away from an incoming KO. Lethal League grows even more fun over time as you figure out your character’s ability set, jam out to some catchy “dub-hop” tunes and try to survive each hectic battle. Up to four players can enter this fighter’s awesomely animated arenas and bash that ball to Kingdom Come. Lethal League is an underrated gem that will soon get the mainstream recognition it deserves.

Buy a PSN Gift Card here so you can digitally purchase Lethal League.

Buy an Xbox Gift Card here so you can digitally purchase Lethal League.

The Gods who starred in the 1st Injustice got embroiled in a war that we loved to see play out. We enjoyed it, even more, thanks to the fact that we actively participated in it. NetherRealm Studios created perfection with Mortal Kombat X, so now they’re looking to take everything they learned with that game and transfer it to the next Injustice. Injustice 2 brings back a bunch of the best characters who fought in the 1st game along with a bevy of new faces. New heroes and villains are ready to go to war and fend off an even more powerful threat than authoritarian Superman. The story mode is going to be amazing, of course. And the new armor system looks like it’s going to make all the game’s mechanics deeper and give us the chance to create alternate characters. Injustice 2 will most definitely do justice to the DC Universe.

Guilty Gear rose like a phoenix when it reached the Xrd part of its ongoing saga. The graphics are tremendous, the roster is amazing and the gameplay has been refined to damn near perfection. The Revelator update threw in a bunch of new faces and modes to keep the series going strong for curious causals and hardcore tournament players. We’re beyond ecstatic to know that ANOTHER major update is arriving and this time, a fan favorite is back to slice her foes in half. The one-armed female samurai Baiken (who got a ton of votes from a fan character popularity poll) will be making her much anticipated comeback. Along with her, another Japanese character roster addition is also coming our way – Answer, the business ninja who throws out business cards instead of shuriken. We can’t wait to main Baiken again! 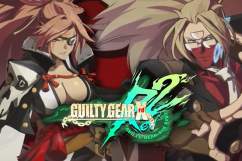