Udon (the comic book giant responsible for most of Capcom’s current comics) gave Street Fighter II an animated revival back in 2008. Super Street Fighter II Turbo HD Remix (WHEW!) took a bonafide retro classic, balanced it even further and offered it to the old/new school fighting game crowd. Capcom is ready to hitch a ride with the Nintendo Switch and they’re going to start off with an even more improved version of SF2. Ultra Street Fighter II: The Final Challengers takes everything seen in that HD Remix while also including two extra vicious versions of the game’s main Shoto members – Evil Ryu and Violent Ken. It still feels like the fighter you spent countless quarters on back in the day. But it looks even bolder and sounds even more impactful. HADOUKEN!

THE WAIT IS FINALLY OVER! Tekken 7 is FINALLY finding its way over to home consoles and PC. Fans have had to get their fix of the game by playing it in arcades, watching it during live stream tournaments and soaking up every bit of newly released info. But now, they’ll all get to enjoy the final chapter of the Mishima Family Saga in the comfort of their own homes. This edition of The Iron Fist Tournament is going all out. The main plot will be playable and told through the use of cinematic scenes that transition smoothly into the action. On the fighting mechanics front, the Rage system introduces powerful new maneuvers. As for the roster, favorites are returning alongside eight newbies. Tekken 7 looks like it may take the crown as 2017’s biggest and best fighter. 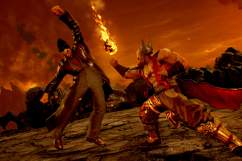 While we were sad to see no mention of a new Super Smash Bros. during the Nintendo Switch reveal, we still got to see a few new fighters. One of them was a pretty zany looking boxing game that implements the use of motion controls. ARMS gives players a wild cast of characters, such as Ribbon Girl and Master Mummy, who face off one-on-one in a myriad of colorful arenas. The Joy-Con controllers will be your main weapons for this motion-controlled brawler, so be ready to get a bit more active for this 1st-party fighter. ARMS may appear simple, but its deeper elements (different types of weapons, super moves, grabs, etc.) make it something that might be way better than we initially thought.