The premise behind this fighter may be super offensive to some. But if you can manage to get past the idea of pitting religious icons against each in battles to the death, then Fight of Gods could turn out to be a favorite of yours. This fighting game sticks by the theme that the path to enlightenment can only be sought after through vicious combat. And the higher powers that offer such a path include Zeus, Odin, Buddha, Anubis, and even Jesus himself! Fight of Gods’ overall theme is completely off the wall, but its stronger than expected battle mechanics lend itself shockingly well to curious FGC competitors.

Pick up a Steam gift card here if you’re looking to start playing Fight of Gods.

SNK is wasting no time in building itself back into one of the top fighting game publishers/developers. They’ve been porting over tons of classic fighters from their vault lately and given bigger releases the full online mode treatment. The Last Blade 2 and Garou: Mark of the Wolves both got their time to shine, so now it’s time for another heralded SNK fighter to get ported over to the PS4. The game picked for that spot is one of the goriest entries in the weapons clashing series, Samurai Showdown V Special. The game’s huge roster and bloodletting gameplay are getting supplemented by online features and all its familiar mechanics – the Sword Gauge, Rage Gauge, Weapon Flipping Attack, Concentration One, and those satisfying Overkill Moves are all intact. There’s no censoring to speak of and all the bugs have been wiped out. This is the perfect version of a fighter that will get even more eyes on it thanks to its online resurgence.

The 3v3 madness of Ultimate Marvel vs. Capcom 3 stayed alive for a lengthy period of time. It’s now enjoying life as a remastered PS4, Xbox One, and PC release. Marvel and Capcom are ready to move into the future of their inter-promotional war and this time it’s heading back to its roots. Marvel vs. Capcom: Infinite is returning to the formula of 2v2 heroes and villains. The roster looks to be even more varied than the ones seen before, plus characters can tap into the mighty powers of the Infinity Stones. Mega Man X, Captain Marvel and more newcomers to the Vs. universe will pull off the slick tag team combos the series is known for in this sequel. 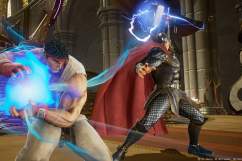 One of the bigger quality surprises of last year was the Wii U’s Pokémon fueled fighter Pokkén Tournament. It featured a unique roster of Pokémon that relied on more than the expected Fighting type. The only knock against it is the fact that the arcade version got plenty of new playable characters that never made their way to the home version. With the recent launch of the Nintendo Switch, The Pokémon Company and Bandai Namco Entertainment saw fit to release the definitive version of Pokkén Tournament. This Deluxe edition features plenty of new active roster members (Darkrai, Empoleon, Croagunk, and Scizor), plus new Support Pokémon (Litten and Poplio). Wanna know what else Pokkén Tournament DX offers? The video posted above delves deep into the game’s feature set quite nicely.