Big mech-based battles (especially ones that feature the mega roster of Gundam’s behemoths) always equals a good time. Bandai Namco’s going to give American fans a piece of the explosive action with the release of Gundam Versus. The roster is massive – you and four other players can choose from 90 of the most popular Gundam Mobile Suits. Battles take place upon open environments where you can shoot, boost and slash anyone unlucky enough to meet you head to head. What makes these robotic skirmishes so tantalizing is the fact that you can team up with your allies for two-versus-two or three-versus-three team battles. This fighter’s been making waves in Japanese arcade for a while now. It’s finally making the transition to a home console, more specifically the PS4. Now we’re finally getting a shot at ruling the battlefield with those same Gundam Mobile Suits. 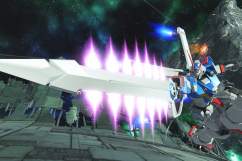 PC gamers who’ve already hopped into this indie fighter have already preached about its legit status. Once it lands on the PS4, it should come as no surprise when that console’s fanbase becomes believers too. Brawlhalla adopts the platform-centric fighting system that the Super Smash Bros. series made so popular and matches it up with 2D visuals. 17 legendary figures (with more characters on the way) make up the roster of mini-warriors who jump high and hit fast. The most fun parts of Brawlhalla occur when four players are onscreen beating each other off of platforms and pulling off double-digit combos. We can’t wait to take this new PS4 fighter online for some outlandish free for all’s.

Gang Beasts is the purest form of multiplayer madness. Its been in players’ hands for a good while now, but 2017 looks to be its official coming-out party. Steam PC owners have already gotten in on the fun, so now it’s about time that PS4/PlayStation VR owners got to do the same. So the premise here is easy to wrap your head around – each player chooses one of four colored, gelatinous avatars. Once chosen, all four players have to grief each other by punching and kicking relentlessly. You become the ultimate victor by tossing everyone else off one of the many stages within Beef City. Gang Beasts has already garnered plenty of attention through live streams and previews, so it’s bound to get an even bigger player base when it officially launches.