Omega Force have started to venture out with its Musou-based hack ’em ups. After refining the better parts of the Dynasty Warriors series, the longtime Koei Tecmo developer has released a flood of spin-off’s and sequels. For the past few years, fans of big-time manga/anime IP’s have gotten treated to those very same types of beat ’em ups that feature their favorites. The war-torn and mercenary filled world of Berserk has finally been given that familiar treatment. While it sticks to the best and worst parts of the Musou genre, Berserk and the Band of the Hawk manages to add its own characteristics and shines because of them.

Like most Musou games, this hack and slasher delivers a story mode that breaks down the 1st three sagas of the Berserk plotline. As Guts, you work as a mercenary for hire who’s revered and feared for his masterful work with a massive blade. After running into a charismatic war band leader named Griffith and losing to him in battle, Guts ends up becoming the newest member of the Band of the Hawk. From this point forward, you’ll play out the many exploits of Guts and his newest allies as they navigate a world built by war, assassinations, politics and magic. Berserk’s most important story sequences are doled out through the use of real-time scenes taken from the newest anime, which is a nice touch. Berserk’s story is definitely intriguing, so newcomers to its ongoing tale will enjoy every bit of its lore.

Getting into the fray of battle is where the fun kicks into overdrive. Along with Guts, Berserk and the Band of the Hawk lets you take control of a number of powerful characters who’s fighting styles vary. Guts lays waste to hundreds of enemies with his long reaching blade, Griffith is a swift fencer who makes quick work of his foes with a rapier, Schierke casts devastating spells etc. One of the most admirable features this Musou spinoff features is its reliance on blood, guts and complete dismemberment. This simple addition does a lot to represent the complete anarchy taking place on the battlefield and the overall mood of Berserk’s viciousness. The more focused boss fights change up the formula from time to time, which means it does a decent job of giving you an actual challenge at times. With a nice roster of characters, fighting styles and sub-weapons to unlock, Berserk and the Band of the Hawk does a bit more than most games of its kind.

The one unavoidable issue that most Musou games always get knocked for is its repetitive feel. Berserk and the Band of the Hawk is no different. During longer play sessions, the action begins to grow a bit dull. While cutting down everyone in your unfortunate path starts out fun, it tends to lose its luster the longer you delve into its often lengthy stages. Plus, the finicky camera tends to lose you when hundreds of baddies surround you. It’s too easy to lose sight of your character and get attacked from all sides due to the unfocused camera. A game such as this one needs a cooperative camera at all times in order to follow the madness you’re leaving in your wake. But sadly, that doesn’t seem to be the case sometimes.

Berserk and the Band of the Hawk – Launch TrailerBerserk and the Band of the Hawk is now available on the PS4(Physical/Digital), digitally on the PS Vita, and on Windows PC via Steam®. Based on the world-renowned manga and anime series Berserk by Kentarou Miura, Berserk and the Band of the Hawk closely follows the events of the most well-known story arcs from the iconic manga’s narrative, focusing on the violent and heroic adventure of Guts, Casca, the Band of the Hawk, and Guts’ Traveling Party throughout their perilous conquest against a sinister realm of demonic fiends. A brand-new trailer was released today to celebrate the action title’s eagerly-anticipated arrival. Berserk and the Band of the Hawk blends the signature ‘one versus thousands’ style action from the long-running Warriors franchise with the grim and gruesome atmosphere of Berserk. Fans of either series and newcomers alike will enjoy a gripping, action-packed adventure as they harness the powers of iconic characters such as Guts and Griffith to slash and smash through hordes of enemies. Players familiar with the Warriors series of hack and slash titles will be able to feel the difference in gameplay through the way each character handles combat. For example, Guts’ massive Dragonslayer Great Sword allows for devastating attacks, and players will subsequently feel the weight of the weapon throughout battle. Alongside a vast array of weapons and sub-weapons, playable characters also possess devastating abilities that must be “awakened” to draw out their true potential. Players can take advantage of Guts’ Berserker Armor to unleash deadly blows, Griffith’s demonic Femto form to deal swift bursts of damage, and Zodd’s giant Apostle form to effortlessly topple foes. The game also incorporates various battle mechanics to better bring the world of Berserk to life, such as Magic and Transformations. An endless swarm of enemies awaits those brave enough to take on the game’s Endless Eclipse Mode, where players can prove their worth as they go toe to toe with countless enemies in the formidable Eclipse dimension. Offering a unique and challenging respite from the main story, the new mode has players fighting for their life as they rush to complete various missions to overcome the deadly Eclipse. Those who manage to withstand the challenge will find themselves better equipped to tackle the main game mode.2017-02-21T13:58:33.000Z

Omega Force’s Musou adaptation of Berserk certainly has its problems. The repetitive feel that wanders in after playing through it for a while is definitely one of them, plus the wonky camera can get in the way at times. Even with those two big cons, Berserk and the Band of the Hawk still manages to be a good time. Its fun and varied cast of warriors, wonderfully animated cutscenes and usage of gore filled battles are its finest features. It has taken far too long to wield Guts’ massive blade in video game form once again. If you’re a curious newcomer or longtime Berserk fan, then this hack ’em up should be on your playlist. 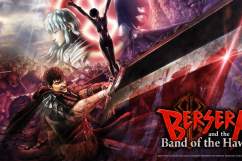 ‘Berserk and the Band of the Hawk’: 5 Fast Facts You Need to Know

Read More
Anime, Game Review, PS4, PS4 Pro
Another Musou game has arrived and it has close ties to another popular anime franchise. But this one heads into the world of Berserk for way more bloodshed.