Nature’s mightiest defender of all things green is now a lock for Injustice 2. Swamp Thing’s reveal trailer as a fighting member of the all DC Comics fighting game has finally dropped and it’s incredible to watch him in action. His repertoire includes using plant life powered attacks, the ability to sink even lower into the ground than other characters, special moves involving the use of clones and powerful whip assisted grapples. As for his super attack, Swamp Thing brings his opponent underground for a back cracking beating that also includes the use of his oversized fists. It’s cool to see that both Swamp Thing and Poison Ivy will be on hand to hand out pain on behalf of Mother Earth’s vegetation. 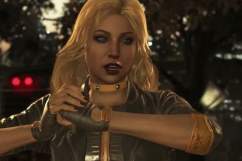