New Hero Preview: Orisa | OverwatchGet a behind-the-scenes look at the development of Overwatch's newest hero, Orisa! Orisa activates on PC, PlayStation 4, and Xbox One on March 21, 2017. Learn more about Orisa : http://blizz.ly/Orisa Start Your Watch today: http://blizz.ly/BuyOverwatch Like Us on Facebook: http://www.facebook.com/playoverwatch Follow Us on Twitter: http://www.twitter.com/playoverwatch2017-03-14T15:00:12.000Z

After spending some time in the Playable Test Realm, Orisa is ready to join the official roster March 21 for the Xbox One, PS4 and PC.

Overwatch’s newest hero recently received a nerf in the test realm. She originally had a 200 round magazine that was lowered to 150 and her Supercharger ability costs more now. Supercharger is Orisa’s ultimate ability and it provides a damage boost to all nearby teammates in its line of sight.

Orisa is a tank character with a two star difficulty that has the ability to attack from long range and launch graviton charges to slow and move enemies. She can use a Supercharger to boost the damage of multiple allies at once. Blizzard refers to Orisa as an anchor tank and say she’ll serve a unique role in the game. 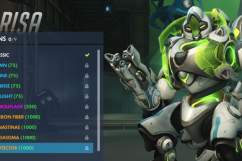 How Orisa Will Fit Into ‘Overwatch’

Read More
Overwatch
After spending some time in the Playable Test Realm, Orisa is ready to join Overwatch's roster March 21 for the Xbox One, PS4 and PC.