“It’s good to be bad.” Such a phrase works so well in conjunction with DC’s array of vicious super villains. These evil individuals are always out to cause headaches for their respective superhero rivals. Injustice 2’s roster features an impressive lineup of evil doers and this new roster reveal trailer puts two new characters on display – Captain Cold and Scarecrow. Captain Cold makes good use of his mastery over the element of ice, while Scarecrow uses his fear toxin and cane weapon to torture his opponents. Not only do we get a good glimpse of them in action, we also get to watch Bane and Gorilla Grodd do some damage to their hapless foes. Enjoy this new character reveal gameplay trailer for Injustice 2. We’re keeping our fingers crossed for an alternate costume that transforms Captain Cold into a familiar Batman baddie! 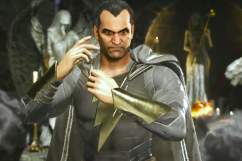