The upcoming sequel to Destiny will have a total reset of your power, possessions, Eververse-related items and currency.

The Destiny development team wrote on their blog on Bungie about why they decided to make that decision.

Sequels represent the start of a new adventure for every player, with new worlds to explore, new stories to tell, new powers to acquire, new loot to earn, and much more. This led us to a decision that would enable us to serve both the game and the player’s best interests: Destiny 1 power, possessions, and Eververse-related items and currency will not carry forward. They will, however, remain accessible to you in Destiny 1.

This appears to be a walk back from the once proposed 10-year-plan Bungie proposed when Destiny launched. Character personalization will carry over to the sequel. Bungie says players that reached level 20 and completed the “Black Garden” story mission will be able to bring their class, race, gender, face, hair and marking selections of that character over.

Bungie says this was the best plan for them for the sequel.

We believe this is the best path forward. It allows us to introduce the major advancements and improvements that all of us expect from a sequel, ensuring it will be the best game we can create, unencumbered by the past. We’re looking forward to sharing more details with you later this year for how we will honor your legacy in the future.

Destiny is going to reveal the final live event of the Destiny 1 era next Wednesday, March 8 called the Age of Triumph. 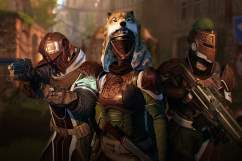 Read More
Destiny
The upcoming sequel to Destiny will have a total reset of your power, possessions, Eververse-related items and currency.