If any of you guys spotted the 1st T-shirt revealed for Injustice 2, then we’re sure you noticed a familiar helmet on it.

That royal crown belongs to Doctor Fate, a mystical hero who’s powers know no bounds. The latest character reveal trailer for DC Comics’ superhero/super villain brawl for all is none other than the being we just mentioned. His superpowers make his moveset one of the more intriguing parts of the game. Doctor Fate can cast powerful spells, take flight, tap into his super strength, utilize telekinesis and perform a wealth of other useful abilities. This Egyptian comic book savior is the perfect addition to the Injustice 2 roster.

Check out his reveal trailer above, then let’s all get prepared for the next character showcase trailer. We’re sure another one’s coming real soon… 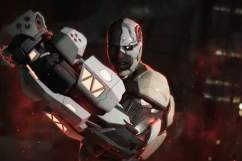