Final Fantasy XV was released in November 2016 for the Xbox One and PS4 while PC gamers were left in the dark.

At last week’s Game Developers Conference, Hajime Tabata, FFXV’s director, showed a video showing the development process of the game. Around the 1:50 mark, footage running on NVIDIA’s new GTX 1080Ti is shown, suggesting a PC version of it exists somewhere.

Final Fantasy XV hasn’t had a PC release ruled out and Tabata actually would like to see a PC release happen.

“I’d like to release the game on PC as a technical attempt. I want to show PC users Final Fantasy XV running on high-end machines, and we personally would like to see it, too,” he said. “Also, I would like to try developing on PC to pursue a unique way of playing with PC-exclusive features like making your own quests and enjoying the world using things like mods.” (From PC Gamer)

The Final Fantasy XIII series and the X/X-2 Remaster have made their way onto PC in recent years to join the majority of Final Fantasy games already available on PC. 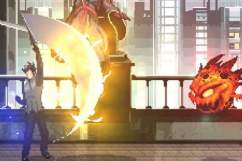 ‘A King’s Tale: Final Fantasy XV’ is Available Today Free For Download on Xbox One and PS4