Over the course of three games, Commander Shepard and his loyal crew of galactic fighters fended off the dangerous Reapers. Fans have had to wait for an extended period of time before the next chapter in the Mass Effect series was revealed. Mass Effect: Andromeda was finally shown to the world at E3 2015, which is when the hype train started taking off. The wait to finally play Mass Effect: Andromeda will finally end on March 21. A new squad leader will be placed under our control as we continue to discover new home worlds within the Andromeda Galaxy.

Mass Effect: Andromeda will introduce new allies, enemies, planets, weapons, skills and a brand new plotline. Here’s what you need to know about the next chapter in the Mass Effect series.

1. Mass Effect: Andromeda is Completely Separate From the Events of the 1st Three Games

It’s the year 2185. The Citadel Council’s four races introduce a new plan that will aid their respective citizens. This strategy is referred to as the “Andromeda Initiative”. Each race decides to place 20,000 people of their own on massive spaceships (referred to as an Ark); each Ark vessel sets out on a 600-year long journey to the Andromeda Galaxy in order to find new home worlds for each race. Before setting off, each Ark places their leadership in an individual deemed a “Pathfinder.” As either Scott or Sara Ryder, players awaken in the year 2819 upon an ark led by their Pathfinder father Alec Ryder. Mass Effect: Andromeda’s journey follows Scott or Sara Ryder as they involve themselves within humanity’s hopes for the Andromeda Initiative.

2. You’ll Take Command as Either Scott or Sara Ryder and Lead a New Group of Squadmates

After selecting your chosen version of Ryder, the other sibling will stick around as an important part of the overall story. You’ll be accompanied by squadmates who stick to a certain race, such as the Krogan or Angara. These allies will fight alongside you in battle, plus you can develop deeper relationships with them through one-on-one conversations. The dialogue wheel makes its return here; when interacting with anyone, you’ll have four response options – heart, head, professional and casual. From time to time, an additional dialogue option (the “Impulse Action”) may appear and give you an entirely different choice to make.

You can refer to the list below to see and read about a few of the character’s you’ll encounter:

Exploring the far-reaches of the Andromeda Galaxy is accomplished aboard the Tempest spaceship. This major form of transport acts as your main hub, which is an area that allows you to select new missions and journey to newfound planets. Making your way across the game’s massive planets can be done thanks to the 6-wheeled, all-terrain covering Nomad vehicle.

Mass Effect veterans know how the 1st three games’ action unfolded – through cover-based skirmishes where futuristic firearms and Biotics were utilized. While those elements are still prevalent in Mass Effect: Andromeda, a few elements have been improved for the better. Moving around wider battlefields, automatically sticking to cover and a more mobile feel for combat make up the action in this new entry. Ryder has way more mobility that Commander Shepard thanks to the addition of a jetpack; this device helps Ryder in battle by activating side by side dashes and bigger leaps. The video shown above offers a visual explanation of Ryder’s suite of gear and abilities.

4. The Game’s Multiplayer Mode Focuses on 4-Player Co-Op Battles Against Hordes of Enemies

The multiplayer portion of Mass Effect’s two sequels returns in Mass Effect: Andromeda. You and three other soldiers will embroil themselves within the game’s Strike Team Missions. You can choose to send APEX Strike Teams in to complete them or choose to play them yourselves through multiplayer means. After choosing your character type and customizing your loadout, you and your online teammates will need to fend off a horde of incoming enemies. Once complete, every player will be awarded with the same amount of experience points and Credits. You can check out the gameplay video above to see Mass Effect: Andromeda’s multiplayer component in action.

5. You’ll Be Able to Get Into This New Mass Effect Adventure Through Three Different Methods

Mass Effect: Andromeda comes in three separate editions – Standard, Deluxe and Super Deluxe. While the Regular Edition of the game doesn’t come with any DLC bonuses, the next two editions actually come with the goodies fans are looking for. The Deluxe Edition features the Pathfinder Casual Outfit, Scavenger Armor, Pathfinder Elite Weapon Set, Pet Pyjak (Monkey), Digital Soundtrack and Multiplayer Deluxe Launch Pack. If you choose to upgrade to the digital only Super Deluxe Edition, you’ll get everything we just mentioned plus extra Multiplayer Super Deluxe Booster Packs, the Deep Space Explorer Armor and Nomad Skin. 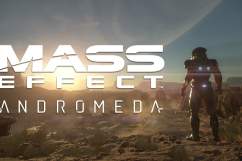