Here are the top five tips/tricks/cheats you need to know for Power Rangers: Legacy Wars.

1. The Basics of Mighty Morphin’ Combat

• So when you first boot up Power Rangers: Legacy Wars, you’ll get right into the fray with a very thorough tutorial. After you’re done with that, always keep this attacking/defending battle flow in mind – a Strike comes out much faster and interrupts a Breaker attack, a Breaker attack overpowers a Defense maneuver and tapping into your Defense means you can always block a Strike. Just move out of the way when a Breaker attack is coming your way. You can always figure out what type of attack your opponent is about to use since the icon for that attack will appear over their head. Respond accordingly! Keep all of these tips in mind as you constantly keep your Leader Ranger in careful motion and pick your attacks wisely. Experiment with your Leader rangers during battle to see which ones can land faster attacks. Those are the ones you’ll rely on most over time. It’s possible to launch your foe into the air with an attack and follow it up with another one if you have enough energy. Try landing an attack during a Assist, too.

• So your Power Ranger team will be composed of three fighters – one Leader and two Assists. The sole Leader fighter is the one you’ll actively use during battle. Leader Rangers stick to one of two classes – Attack or Defense. The more offensive-minded Leader Rangers have more attack moves, while the more defensive focused Leader Rangers get access to more shield maneuvers. Assist Rangers can be called upon during battle to land an attack, such as the original Pink Ranger who shoots off a quick arrow. The Assist Rangers are capable of landing melee or ranged attacks, so experiment with them all to see which combinations work best. Keep in mind that the health of your Leader Ranger depends on the combined health pool of your entire trio. Constructing a team of high-HP Power Rangers can do wonders for your battle progress. And combining one melee and one ranged Assist Ranger on your team should always be a viable tactic.

3. All the Game’s Goodies Reside in Morph Boxes and Corruption Boxes

• So there’s a whole lot of collectibles featured here – Power Coins, Power Crystals, Zeo Shards, XP, new Power Rangers and the boxes that contain such rewards. As you get promoted to new battle leagues and win fights, you’ll unlock better Morph Boxes. Keep in mind that you can speed up the unlocking process for a Morph Box by paying the required cost of Zeo Shards. You can have up to four Morph Boxes ready to open at one time. Corruption Boxes work a bit differently, though – you have to dish out the requested amount of damage for opening them by participating in battles. The damage you attain gathers up during battles you win and lose, so don’t worry too much about taking an L too much. You’ll have the opportunity to work on releasing the goodies within a Corruption Box every 24-hours. Make sure to keep note of the achievements you complete in order to get extra XP and Power Crystals.

• As you build up your team of unlocked Rangers, you’ll become more familiar with the upgrading process. Heading into the shop will give you a look at the featured Rangers that the game recommends you unlock. You’re going to have to spend a good amount of Power Coins in order to fill a Rangers’ unlock meter and add them to your roster. Once unlocked, you’ll have to spend the required amount of Zeo Shards and throw in some Power Coins to boot in order to upgrade any one of them. Focus on upgrading the Rangers you use most. There’s really no point in wasting currency to improve the Rangers you actively despise.

5. Hook Up With an Alliance ASAP!

• Once you reach player level two, you’ll unlock the ability to join an alliance or create one of your own. Alliances are your primary way of gaining and donating extra Zeo Shards. 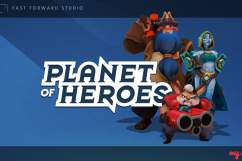 ‘Planet of Heroes’: Top Tips & Cheats You Need to Know