Breath of the Wild Any% Speedrun in 1:05:17Twitch: https://www.twitch.tv/venick Twitter: https://twitter.com/Venick409 The run is in French because they talk faster, so the cutscenes with voice acting are faster. I chose not to use an Amiibo this time because I only have the one for Epona. It seemed silly to run with Amiibo and only save 20-30 seconds, when optimally you would use…2017-03-07T18:09:12.000Z

The Legend of Zelda: The Breath of the Wild features the biggest world ever seen in a Zelda game by far but that doesn’t stop people from speedrunning the game.

Once you finish the Great Plateau area, you are able to head straight to Hyrule Castle to defeat Ganon. Players who speedrun will go there with three heart containers and a single stamina upgrade.

Many players have attempted the speedrun the world record is currently 1:05:17 held by YouTube user Venick409.

Breath of the Wild Any% Speedrun in 58:01Live attempts at: https://www.twitch.tv/gymnast86 Twitter: https://twitter.com/MrGymnast86 First somewhat decent run of mine, obviously can be much better optimized though. This run is done on an NTSC Wii U using an English digital version of the game. Amiibo are not used. I have a license to use Nintendo’s content in this video through the Nintendo Creators…2017-03-11T04:43:15.000Z 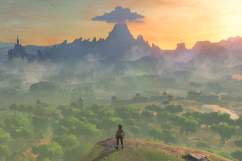