So the week before, the final Injustice 2 Shattered Alliances story footage was shown off. The biggest reveal we all got to see was the unveiling of the game’s main threat to Planet Earth – the planet collector, civilization destroyer known as Brainiac. During that story trailer, a few bits of actual gameplay from Brainiac were quickly shown off. Today (April 24), NetherRealm Studios has decided to give everyone an extended look into his unique combat stylings. Brainiac chooses to wipe out the opposition with the aid of powerful tentacles, assist drones, an electrical barrier and more. Judging by this trailer, we can see why he’s been set up as the game’s main villain. Check out this new Injustice 2 character reveal trailer and count down the days until it finally launches on May 16. 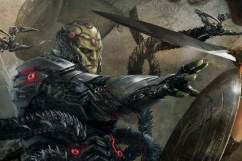