Let’s give a round of applause to everyone who’s connected to Injustice 2. The game’s development team, publisher and dedicated comic book experts are doing everything to make this sequel one of the best fighters of 2017. Earlier this week, Brainiac’s reveal trailer was shown off and we have to say – we’re quite impressed. It turns out that that’s not the only piece of new gameplay footage we’re getting from the game this week. A special DC Access live stream event for Injustice 2 will hit the web and give everyone new character reveals and plenty of fresh gameplay to salivate over.

A ton of guest stars will also be on hand during this live stream event, too:

Enjoy this 2-hour live stream and get a sneak peek at what’s to come from Injustice 2. While you’re here, take a look at the 1st gameplay footage of Darkseid and The Joker below (we also have some footage of the Multiverse game mode): 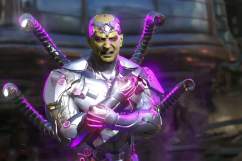