Telltale Games has transported us into a variety of worlds with interesting narratives that are woven out through our decisions. We’ve had to live in a world plagued by the zombie apocalypse, don The Dark Knight’s armor and defend Gotham City, solve crimes in a world inspired by fairy tales etc. Marvel Comics has jumped onto the Telltale Games bandwagon and the series that was chosen for this new partnership is an interesting one. Marvel’s Guardians of the Galaxy: The Telltale Series brings Marvel’s outer space freelance defenders to the small screen with a quality 1st episode. Peter Quill (Star-Lord), Gamora, Drax the Destroyer, Rocket Raccoon and Groot’s clashing personalities pulled us into an adventure we can’t wait to see fully unfold.

From the jump, it’s clear that Telltale Games paid close attention to the spirit of the Guardians of the Galaxy. As soon as you hit the main menu, the sound of an 80’s hit song reminds you of Peter Quill’s appreciation for great music from his era. Peter’s many personality quirks, such as his carefree personality and penchant to drop snarky comments during serious moments, help make every conversation you engage in a humorous one. Gamora is a headstrong warrior, Rocket is a smart-mouthed but dependable tactician, Drax is always out for blood (and horrible at dissecting inside jokes) and Groot is…well, he’s Groot. Watching how this rag-tag group of galaxy travelers interact with each other leads to some of the more hilarious exchanges in the game. This is one of the more amusing Telltale Games’ series released thus far, which gives it that special quality and helps differentiate it from the games based on The Walking Dead and The Wolf Among Us.

A common criticism brought against Telltale Game’s projects is its lack of actual gameplay. Their Batman series implemented more mechanics that gave us all way more activities to actively participate in. Guardians of the Galaxy improves upon everything seen in that aforementioned game. Peter Quill is armed with a pair of laser pistols, which you’ll enjoy blasting baddies with during the more action-packed sequences. This intro episode pits you against one of the most powerful villains within the Marvel Comics universe, which erupts into one of the best moments. Getting the chance to utilize the strengths of the entire team makes these instances even more satisfying to play out and watch unfold. On top of all that, you’ll get to move around much faster this time thanks to the addition of a fast-walk button and jetpack boots that help you discover other options that help solve a problem. There’s a lot to take in during this introduction to the series, such as deciding how to take down a certain “Mad Titan,” the best approach towards dealing with rival factions, helping an ally with their sibling issues etc. The overall story arch in Episode 1 does an awesome job of getting you excited for whatever comes next.

Most of this initial episode is filled with plenty of provocative moments (experiencing Peter’s younger days happens to be some of those moments). However, the chapter that’s more dull than anything happens so soon after an intense action sequence. While this slower series of events doesn’t bring the whole chapter down entirely, it’s still jarring enough to cause you to be less confident about the next series of events. Luckily, things pick back up quickly and the best mechanics of this new series are put back into the spotlight. While we appreciate Telltale Games for their continued work on narrative-focused experiences, we still wish they’d put a bit more time and effort into improving their game engine. We still ran into the legacy problems their titles are known for – random bouts of slowdown and moments where the game freezes during an intense moment. Hopefully, these longtime issues will become a thing of the past when Telltale Games releases their next playable adventure.

Marvel’s Guardians of the Galaxy: The Telltale Series comes out of the gate strong. Telltale Games and Marvel Comics obviously did the work necessary to make sure the spirit of these heroes are perfectly represented. The 1st episode provides all the humor, action and heartfelt moments that fans of the 1st film and comics regard so highly. Special attention has been paid to the game’s more interactive sequences, which helps it differentiate itself from Telltale Game’s more slower moving titles. The bar part sequence may be a bit boring and the technical problems are definitely an annoyance, but this is a good effort from Telltale Games’ first Marvel Comics collaboration. We’re all in for this journey into the far-reaching galaxy. 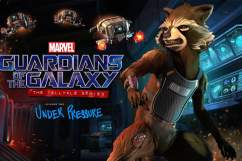 ‘Marvel’s Guardians of the Galaxy: The Telltale Series’ – Episode 2 Review