AMD launched its new line of processors, the Ryzen R5 series, yesterday and teased the launch of their new Vega GPU line with a video. If you look closely at the trailer, you can spot Master Chief from the Halo series in there. More specifically, it looks like Halo 3. Coincidentally, 2017 is the 10-year anniversary of the popular title so there could be a remaster in the works but we don’t know for sure. This could just be DLC for Halo Wars 2 for all we know.

As with all rumors, take them with a grain of salt but this would be cool to get a remastered Halo 3 on the PC. Microsoft has been trying to push their Windows Store and getting a good Halo game on there would be a step in the right direction. This comes on the heels of a potential Halo Wars release on Steam. If either of these are true, it would be great for gamers. 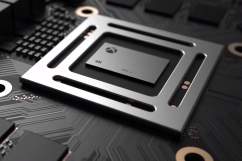 Read More
Halo, PC
AMD might have shown us Halo 3 is coming to the PC.