Ever since Superman fell at the hands of Batman and his alliance, a new villainous group has arisen. That evil organization, The Society, is the focus of the 4th trailer in Injustice 2’s “Shattered Alliances” plot series. Gorilla Grodd is shown off within this new piece of story mode footage as the leader, while villains such as Cheetah, Deadshot, Bane, Captain Cold and others can be seen following him in his plans to fill Superman’s void. The Society looks like they’ll be the biggest threat than Batman and the allies he has left have to contend with. Or is it? There is the matter of Brainiac and his impending doom to worry about, too. Looks like we may just get more details on that dude and his plans in the next Shattered Alliances story trailer. For now though, enjoy this new inside look at Injustice 2. 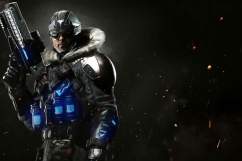