The denizens of Earth have every right to be paranoid in Injustice 2. Many of the heroes they grew to trust turned out to be crazed, power hungry dictators. And the super villains they detest so much have banned together to fill the void left by a manic Superman. But their biggest fear happens to be an evil individual who even has Supergirl shaking in her boots – Brainiac! This brand new (and final) “Shattered Alliances” story trailer details his arrival to Earth and all his most dastardly actions. Batman and his allies have to contend with an enemy unlike the ones they’ve faced in the past. Brainiac’s gameplay is briefly shown off during this inside look at his importance within Injustice 2’s plot. Check out all that new footage right here. 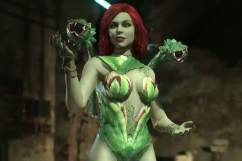