If you’re old enough to remember the classic reign of Rare’s N64 platformers, then your eyes have probably been placed squarely on the developmental process of Yooka-Layley. Like most games of its kind, Playtonic Games’ Kickstarter-funded project is dedicated to bringing back a style of games that aren’t as prevalent as they used to be. While today’s onslaught of less colorful games that rely on more mature themes still attracts gamers, there’s still a group of interested parties out there who wish to return to the glory days of their favorite genres. Yooka-Laylee isn’t exactly a home run, but it still manages to prove that 3D platformers can still thrive in this day and age.

Your lovable mascots come in the form of a chameleon and bat named Yooka and Laylee, respectively. Their relaxing day gets interrupted by the evil exploits of a man who’s stolen a magical book. The book’s magical Pagies become scattered throughout a bevy of themed environments. This event sets Yooka and Laylee’s adventure in motion. The story itself is simple and not incredibly meaningful, but it doesn’t really need to be (this is one element of 3D platformers that this game also adopts). During your Pagie collecting journey, you’ll explore a collection of vibrant worlds and chat with a host of humorous characters. What makes these conversations with them so endearing is the return of the audio gibberish that was featured in Banjo-Kazooie. The lighthearted feel and 4th-wall breaking jokes that give this game its personality are a byproduct of the endearing cast.

Traversing through Yooka-Laylee starts out simple enough. You’re tasked with collecting enough Pagies to either expand an already opened book world or unlock an entirely new one. Over time, the game truly opens up and gives you a dizzying amount of objectives to complete and collectibles to gather. While the era of collect-a-thon games has ended, Yooka-Laylee brings that style of gameplay back with enough entertaining diversions to make it feel like less of a chore. Each expansive world is packed with clever puzzles to complete, big boss fights to discover, throwback mine cart missions and plenty of other fun diversions. The game opens up even more as you purchase new moves for Yooka and Laylee. Getting access to Laylee’s sonar shot, Yooka’s super jump and their dual rolling technique helps you complete the type of missions you were unable to beat before. The game’s constant sense of progression is clearly apparent as you run into new problems and eventually unlock a new move to get past them and collect your Pagies. The wealth of entertaining missions and collectibles in this platformer provides a lengthy amount of things to do. Completing those tasks in co-op form and competing in competitive multiplayer games just adds that much more to the game’s fun factor.

Yooka-Laylee not only adopts the best elements of old school 3D platformers, it sadly retains some of its worst mechanics as well. The problematic camera gets in the way of things at times. Missing a carefully placed platform or having the camera get stuck in place can become a regular occurrence at times. And then there’s the current-gaming feature omissions that damper the overall experience. There’s no manual save option, so forcing yourself to collect a Pagie just to auto-save is an issue. Another annoyance is having to carefully locate which missions you were unable to beat beforehand without the use of a mini-map. And having to work your way all the back to a world you were working on when you return to the game can be quite the nuisance. These retro problems should have been left in the mid-to-late 90’s where they belong.

Thankfully, Yooka-Laylee avoids the disappointment of some recent Kickstarter-funded games. Playtonic Games paid attention to the best parts of Rare’s N64 3D platformers and revived them within this whimsical project. The game’s main duo and outlandishly designed characters they encounter are all lovable. The beautiful worlds, crazy amount of collectibles, multiplayer options and smart sense of progression all equal up into the best parts of Yooka-Laylee. This release doesn’t exactly hit a home run due to the problematic camera and 3D platformer legacy issues that should have been rectified in this age of gaming. Yooka-Laylee is still worth your time if you look back on the days of Banjo-Kazooie and Donkey Kong 64 fondly. As for everyone else, you probably won’t be as enamored with it as much. 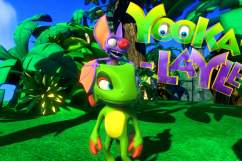