ARMS’s Global Testpunch had its first day today, allowing players to try out the game for free. I enjoyed the hour I played of it but I do have some concerns.

Party Match is the only game mode available, allowing you to join online players in matches. Match types include a one vs. one match, one vs. one vs. one, two vs. two team match, and a volleyball match in which players bat a giant ball over a net with their fists. Matches are fought in one of three arenas, a normal, square arena; a laboratory with breakable pillars, and a temple with a huge ramp. Matches can occasionally have power-ups including health boosts and bombs that players have to bat between each other lest be blown up.

First of all, you should switch from the motion controls to standard ones immediately. While moving around and punching is surprisingly accurate with the Joy-Cons, there are so many actions you need to perform in a match that it can be almost unplayable. You have to lean the Joy-Cons to move and thrust them forward to attack while curving them to curve your shots in the game. Plus you have to press the two buttons on top to dash and jump. Using a regular controller is much more manageable and you can still curve shots by tilting the left control stick, but it’s still quite overwhelming at times. I often find myself pressing the dash button instead of the left punch button.

You really have to break yourself into the game, but once you do you get a very tactical fighting game. Punches have to travel a certain distance before thy can be fired again, so you have to balance attacking and defending. You also have to aim your shots properly so they actually hit and keep a proper distance from the opponent. It requires you to read your opponent’s actions so you can respond accordingly, just like any other great fighting game. You can’t just flail your arms and expect to win. There’s a lot of tactics to play with such as blocking punches with your own and baiting opponents into dodging only to hit them with a well-timed punch. I may have done that once or twice by accident since I’m not that good at this game.

One on one is where it’s at since it’s just you and your opponent reading and countering each other. Team matches can be fun too as you can attack distracted opponents and help out your teammates, but matches can often be too hectic for their own good. But it’s the every-man-or-woman-for-himself/herself one vs. one vs. one matches that can be a hot mess. You can often just wait for your two opponents to beat the tar out of each other before finishing them off. And if you fight as Master Mummy, you can heal by guarding as opponents fight. Another big problem is that you have to reach down to the directional buttons on the left Joy-Con to switch opponents (at least with a regular controller), making fending off multiple opponents less graceful. Volleyball is a fun distraction even if it is a bit hard to get the ball over the net.

I have to spend more time with ARMS to get a full idea of how I feel about it, but so far it shows promise despite its worrying problems. There are so many different actions that controls can get muddy, especially with motion controls thrown into the mix. Fending off more than one opponent can devolve into a chaotic and unbalanced mess. However, the potential for deep, strategic combat keeps me hooked and I feel myself improving even a little bit with every match. Hopefully that depth can be retained even with the somewhat sloppy controls.

If you missed today’s Global Testpunch, you can check it out tomorrow. Below is a list of all the times the testpunch is active. Each period is active for about an hour. 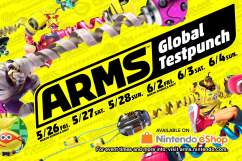 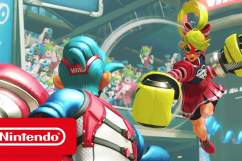