Battle Islands: Commanders – Out Now on iOS, Android, PS4, Xbox One and SteamTake part in major WWII battles in Battle Islands: Commanders, from the sandy dunes of North Africa to the bitter cold of the Eastern Front! Master the art of war against real opponents from around the world and reap the spoils of war. Download NOW for Free! On the App Store bit.ly/BIComAppStore On Google Play…2017-05-10T22:26:41.000Z

Here are the top 10 tips/tricks/cheats you need to know for Battle Islands: Commanders.

• Up to 40 Commanders can band together to create an Alliance to compete and cooperate with each other. While in an Alliance you can, chat, donate and receive units, to earn precious XP, as well as test your battalion in exciting friendly battles.

• We all love to see a wave of incoming Juggernauts heading toward the enemy warship but a heavy battalion will leave you vulnerable elsewhere. Try to balance the units you take into battle so that you can cover as many situations as possible. If the enemy swarms you with infantry, you want to have a Mortarman, Missile or Flame Tank ready to take them out.

• Deploying your troops effectively and managing your Command Points (CP) is crucial to getting those all important victory medals. Don’t place a single tank down when you do not have enough CP to place something to support it, a Medium Tank cannot do much damage unless it gets to its target. Save some CP and support it with a Mortarman or some Rebels for maximum impact.

• When being swamped by the enemy it’s often worth taking some damage on your bunkers so that you can effectively mount a counter-attack! Use this opportunity to build up a strong push while simultaneously destroying the enemy’s push.

• Placing the right unit at the right time can be the difference between victory and defeat. Use your defensive emplacements to effectively lure slow tanks away from your bunkers and support them with fast firing infantry, or armour piercing units, from behind.

• If you are the kind of commander who enjoys to crush their enemy as quickly as possible, consider using units such as the Half-Track, Jeep, Motorcycles and Fighter that will really leave the opposition licking their wounds.

• Prefer to sit back and watch before making a move? Then how about trying a more defensive strategy. Use spawners such as the Barracks and Garage to build up a steady wave of troops while defending with defensive emplacements like the Gun Turret and Howitzer. You might also find a good spot for the AP Mine and AT Mine if you really want to surprise the opposition then take advantage of the opening in the enemy’s frontline.

• As your progress through the Theaters, you will soon come across Camouflaged units. These advanced units will be completely invisible to your enemy when they are played, not until they are triggered will they be seen! Take advantage with the element of surprise using hidden Gurkhas, devastating AT Mines and sneaky Commandos.

• Looking to try out a new unit you have just promoted or unlocked? Want to see if your new Flamethrower will really heat things up if played behind your new Tank Destroyer? Refine your battalion and strategize by battling friends in your Alliance.

10. Be Resourceful, Know Your Perks, Watch the Enemy and Keep Your Eye on the Next Unit

• Make sure you don’t waste a unit that could be better used in defense or vice versa, adding your Machine Gunners to a strong push may seem worth the extra damage, but it might be better holding them back just in case of rogue heavy armor.

• Different units have special perks which give them different behaviors on the battlefield. Units like the Bazooka have special armor-piercing rounds which do devastating damage to any armored unit. The Flamethrower and Flame Tank both explode after they are defeated, damaging and knocking back any surrounding enemies.

• In battle, you should quickly be able to decipher the type of Commander you are up against by the first few units they deploy. You will need to think quick to devise a strategy, remember they will have eight different units to play, try to predict their next move to ensure victory

• You are always shown the next unit which will be available to you, always take note of this as you might not have a good synergy with your current units, but the next one might well be the one you are after and it will be available as soon as you deploy your next unit. 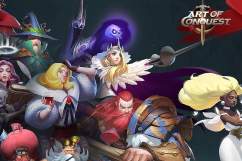