Update: Ed, a new game balance update, an update for the Capcom Fighters Network and some unannounced bonuses, will be released for download on Tuesday, May 30.

If you happened to get through both of SFV’s Story Modes, you came across a young Shadaloo affiliate named Ed.

This child prodigy was supposedly being groomed to be the next replacement body for M. Bison. But once Balrog took the Psycho Powered boy under his wing, Ed became something much more dangerous. Thanks to the accelerated aging side effects of such a power, Ed has turned into a hulking boxer who’s now a force to be reckoned with. His reveal trailer has finally dropped and it shows off all the cool combos and nasty damage he can dish out. His moveset consists of slick punches and Psycho Power projectiles. Ed totally looks like a “What if Dudley had Psycho Power?” dream scenario come true. Once released, he’ll come with the regular outfit you see down below, his hooded Story Mode costume and an M. Bison inspired Battle Costume.

You’ll be able to take Ed into the training room during the next Capcom Fighters Network Beta (Thursday, May 11 until Sunday, May 14). You can read up on his V-Skill, V-Trigger and Critical Art straight from Capcom Unity down below:

– V-Skill: Psycho Snatcher – Ed releases Psycho Power from his palm, pulling himself or opponents depending on how long he charges it up.

– V-Trigger: Psycho Cannon – With a full V-meter, Ed releases an enormous amount of Psycho Power. He can follow alongside it, allowing him to pepper in shots when it connects with the opponent.

– Critical Art: Psycho Barrage – Ed lunges forward with a series of punches. If at any point he connects, he’ll continue weaving around the opponent, slipping in quick combinations of Psycho-punches ending with a powerful uppercut.

– Special Moves – What makes Ed especially unique is how players perform his special moves. His special moves have simple inputs; they only require simultaneous button presses, repeatedly pressing a button, or holding down a button. Only Ed’s Critical Art is done by inputting a traditional motion. 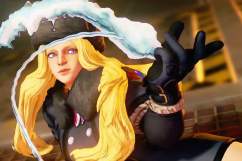