Injustice 2 has finally released upon the world and with it comes a collection of famous comic book characters that are all playable. Some of these names include Batman, Superman, Aquaman, Scarecrow, and even Brainiac, however, one of the most infamous villains to join this roster is Darkseid. This powerful antagonist was first introduced in Superman’s Pal Jimmy Olsen #134 (1970) and he has since then flourished as one of the most powerful and noteworthy characters among fans.

Despite this, Darkseid is only available as a pre-order bonus for Injustice 2, meaning there will be no way to unlock him in the game upon release. This pre-order bonus is not limited to physical copies, so if you are looking to buy a digital version of Injustice 2 then you will also receive Darkseid. It’s fully possible that this villain will be purchasable once the game launches, as it would be hard to imagine that developer NetherRealm Studios gates access to him off solely around a pre-order bonus.

For those who have picked him up, Darkseid is a ranged based character whose fighting style focuses around his powerful Omega Beams. These lasers are capable of inflicting high damage and are incredibly unpredictable thanks to their sporadic movements. He also can teleport himself next to his opponent and has a number of moves that knock foes across the screen. Darkseid’s character ability is focused around summoning different types of Parademons, which can either dive, explode, or shoot fireballs. This helps give Darkseid players a way to zone quick and agile foes that can close the gap or dodge his powerful ranged attacks. 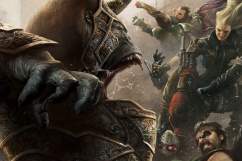 ‘Injustice 2’: 5 Characters We Want as DLC