Injustice 2 is inching ever so closer to its May 16 launch.

The past few Watchtower dedicated live streams for the game have given us tons of footage for the game’s returning roster members and newcomers. This next one is set to delve into everything that makes the game’s pre-order DLC character so dangerous. Darkseid will finally be shown off in a greater capacity , but wait…THERE’S MORE! NetherRealm Studios has already promised to show off two other characters, but their names haven’t been revealed yet. Will we get to see more of Green Lantern, Green Arrow, Cyborg, Black Adam, Aquaman or even The Joker? Or better yet, will one of the unannounced DLC characters get revealed? *please be Spawn or Starfire* This Injustice 2 Watchtower live stream looks to be one of the more exciting ones thus far.

So stay right here to see how Darkseid and the game’s two other roster members are shaping up. 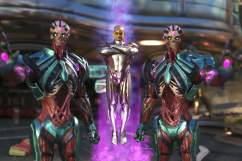