The finish line is so close, isn’t it?

What we’re alluding to is the ultimate goal we’ve all been wanting to reach – May 16, 2017. That day marks the highly anticipated launch date for Injustice 2. For months, we’ve been bombarded with all the information for the DC Comics fighter that we’ve wanted since it was announced. The entire on disc roster has been unveiled, we now know a few of the game’s DLC bonus characters, we’ve gotten a breakdown of the Gear System and we’ve gotten a glimpse at the cinematic Story Mode.

Today’s Watchtower live stream (May 10) is set to delve into everything that two of the game’s villains can do. Extended matches featuring the The Joker and Brainiac will give everyone a better idea of how to best utilize them in battle. So chill out here with us as we bask in the evil doer glory of Gotham’s Clown Prince and Superman’s ultimate nemesis. While we’ve got you here, make sure you also check out the “Everything you Need to Know” trailer about Injustice 2 below: 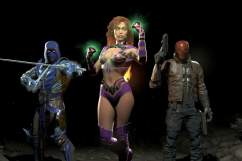