The big reveal in the new Madden 18 trailer came towards the end as EA Sports gave a glimpse into a new game mode. While the name of the mode has not been announced, fans are referring to it as Story Mode.

EA has given fans very little information to work with but presented enough in the trailer to wet our appetites for more. Despite the little official information, it has not stopped people from speculating on what the new mode will entail. From the sounds of things, it is all the info we are going to receive until EA Play on June 10. An EA spokesperson spoke with USA Today about the speculation that has occurred after the trailer release.

“As you saw, today you got a very brief sneak peek at a brand-new way to play Madden NFL 18. We’ll be revealing more details on June 10 at EA Play,” EA told USA Today.

The trailer showed a man sitting in a room and the scene ends with him looking through the window at Lucas Oil Stadium. The game developers could have shown any stadium but why did they choose the home of the Colts?

Smart money says it is a veiled reference to the NFL combine which indicates there will be a pre-draft portion of the new Story Mode. This raises another set of questions given EA’s tenuous relationship with the NCAA. The company stopped making its popular NCAA franchise after legal implications over college player licensing.

My thinking is the new mode will be a scaled down version of what NBA2K fans know as My Player mode. For football fans not familiar with the 2K series, your character starts the mode by choosing a school among several popular college basketball programs. For example, I chose to play for Georgetown. The game then allows you to play a few college games and your performance impacts your draft stock. Here’s a deeper look at the mode:

From there, your player gets drafted and players are inundated with daily choices like marketing deals in addition to playing in actual games. As someone whose favorite series of all time was the NCAA football games, I would love for Madden to implement their version of this into the upcoming game.

This seems like wishful thinking given EA essentially severed their relationship with college sports years ago. The developers could opt to use fictitious names and colors for the universities if they decide to start your character during his college career. The mode could also start after the character’s college career is completed and the Combine would be the beginning of the new Story Mode.

While 2K Sports is a competitor of EA, they would do well to borrow some of the ideas of the successful basketball mode. EA does have experience with this type of gameplay through FIFA’s popular mode The Journey. Here’s a look at how EA did the mode on the soccer franchise:

However the Madden team decides to implement the new Story Mode, it is going to help lead to a highly anticipated release of the new football game. This combined with the new Frostbite engine should lead to an even better gaming experience on a franchise that is already widely popular.

Here’s a video breaking down some of the rumors for the Madden 18 Story Mode: 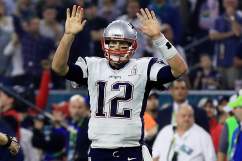