So you just got a copy of Mario Kart 8 Deluxe for the Nintendo Switch and you want to brag about it to all your friends. So you decide to take a screenshot of the game with the square capture button towards the bottom of the left Joy-Con and put it on social media. You could take a photo like this:

How do you take awesome screenshots such as this? Just follow these easy steps.

Mario Kart 8 Deluxe has a feature called Mario Kart TV where the game generates a montage of race highlights after races. The video that plays is actually very dynamic and seeks action packed moments, making it perfect for screenshots. The key to taking awesome screenshots is to take them during one of the videos. Not only will you get well-composed shots, but you also don’t have to fumble with the capture button during a race.

After you finish any race or battle mode round, you’ll get different menu options. Scroll down to “View Highlight Reel.” Click that and you’ll start viewing the video. Use the control stick to fast forward or rewind the video and hold the B button for slow motion. Press the A button and then scroll down to “Edit Highlight Reel” to change the clip for even more photo ops. You’ll be able to select specific drivers to view, change the duration of the clip, and change the focus of the footage to power-ups, drifting, and more.

Be sure to use the rule of thirds for more dynamic photos. Imagine your photo divided into thirds and place your subject into these sections instead of just in the center. Try to get the face of the drivers in the shot too as faces add a lot to pictures – even cartoon ones. While taking photos of drivers in interesting camera angles is cool, try to focus on interesting actions or visuals.

For example, you could take a picture showing a racer in flight:

Or you could take a picture of them using a power-up at an opportune moment:

As is a shot of a close call:

Sometimes you can get a cool over-the-shoulder shot:

Be sure to take advantage of the game’s anti-gravity racing for some wild camera angles:

If all else fails, just get a good shot of karts racing:

This is one of my favorites. Notice the shooting star and the racers on the track in the background:

While it stinks that the capture button can only capture photos and not video as well (at least not yet), it’s still great fun to take photos with it. Of course, it wouldn’t be nearly as much fun if Mario Kart 8 Deluxe wasn’t such a photogenic game.

Now get out there and start snapping pictures! 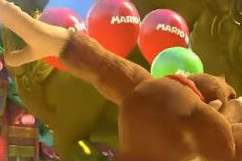