On the surface, Pokemon Magikarp Jump looks like a simple game. All you have to do is feed or train your Magikarp and enter it into jumping competitions, which is simple right? We’ve covered some basic tips and tricks when the game came out but now we’re going to show you how to turn your Magikarp into a ferocious Gyarados.

When you’re at your main screen, head to your item bag and you should notice an Everstone in it. This is a stone that is popular in the handheld Pokemon games that causes the Pokemon holding it to never evolve. This is what is holding your Magikarp back from greatness. We’re actually not sure why anyone would decide to give their Magikarp an Everstone, but we digress.

You can’t really do much with the Gyarados but it will unlock Event No. 34 “Adios, Gyarados!” so you can check that off your list of things to do. You can check your other events by clicking Town-Records-Events. If you have a Shiny Magikarp, you can follow the method and your Magikarp will evolve into a Red Gyarados, made popular from its appearance in the second generation Pokemon games. All of this is pretty much only done for fan-service but it’s still cool to see it included in the game.

Have you discovered any more secrets hidden in the world of Pokemon Magikarp Jump? Let us know in the comments below! 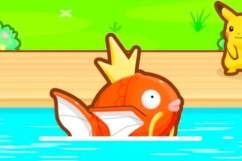 Read More
Android Games, iOS Games, Pokemon
Here's how to turn your Magikarp into a Gyarados.