Indie Studio No Matter Studios is being forced by ZeniMax Media Inc., the parent company of Bethesda, to change the name of their game Prey for the Gods to Praey for the Gods because they thought it was too similar to Bethesda’s the upcoming Prey.

Using backer money towards something that doesn’t go towards the development or backer rewards felt horrible to us. Even if we did win we’d have to spend a solid chunk of our funds and in our opinion it wasn’t worth it.

They then went on to say that they originally wanted to name it “Præy for the Gods” back in 2015 before the initial trailer, but they thought that it would be hard for people to enter it in search engines. They applied for trademarks for both “Prey for the Gods” and “Præy for the Gods,” but they were both opposed by ZeinMax. They get to keep the logo.

It was something that kept me up many nights, and no doubt shifted our focus from our game frequently. This is really something no starting company should have to deal with let alone a tiny team of three. So the fact that we came out the other end intact still developing the game was a win, one that will no doubt shape our company moving forward.

A representative from Bethesda told IGN that they first reached out to No Matter Studios in November of 2015, before the Kickstarter campaign began, and “multiple times” since then. They also provided the following statement:

We really didn’t have much of a choice. If we don’t oppose the mark, we risk losing our Prey trademark and that isn’t acceptable. Unfortunately, that’s how trademark law works.

This isn’t the first time ZeinMax disputed trademarks over game names. Back in 2011, Zenimax contested their ownership of the trademark “Elder Scrolls” when Minecraft creators Mojang applied for a trademark for their game Scrolls.

Praey for the Gods is an action survival game inspired by Shadow of the Colossus and Bloodborne where you try to save your dying world by killing massive monsters. The game received $501,252 from 14,738 backers on Kickstarter and plans to release on PS4, Xbox One, Mac and Steam. 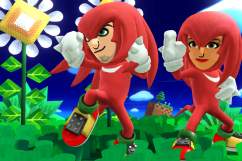 Nintendo Won the Lawsuit Against their Mii Characters