1. The Story is Heavily Inspired by Japanese Mythology and Rap Culture

Project Rap Rabbit (working title) builds upon the skills of both developers as a story-based rhythm game. The game is heavily inspired by Japanese history and legend but with sci-fi and rap culture elements weaved in. Spirited Away and Kung Fu Panda are also big inspirations.

According to the Kickstarter page, the game takes place in an alternate history version of 16th Century Japan. People are becoming more and more distrusting of each other as the world becomes more diverse. But then an apocalypse leaves the world in shambles. A humble rabbit called Toto-Maru journeys the land with his sidekick frog Otama-Maru and the power of music to take on the most powerful overlords and restore peace to the world.

2. The Game Lets You Pick Your Own Lyrics and Rhythms in Rap Battles

The gameplay is based on their prior rhythm-action games where you press buttons in time with the music. Matsurra and Yano plan to expand on the genre’s established mechanics by creating a rap battle system where you can counter-rap against an opponent and select different moods for rapping with an emotion/dialogue wheel in the same vein as modern RPGs like Mass Effect. Songs are composed of full dialogue trees as opposed to linear songs. There’s also a competitive leaderboard planned.

The main flow of the game involves three parts: Listening, Responding, and Rapping. Listening involves picking out highlighted keywords from an opponent’s rap so you can use them against them. Responding involves selecting the mood of your response to change the rhythm of the game and inflict different levels of damage to the opponent’s swag guage. Finally, Rapping has you pressing specific face buttons at the right time to deal damage and raise your own swag guage. How each response affects your opponent’s swag guage can change depending on the health of your own swag guage.

3. The Game is Being Created by Two Rhythm Game Legends

Matsurra founded progressive pop/rock band Psy-S in 1983 and served as the band’s composer, arranger, and synthesizer player. He won a Multimedia Grand Prix award for becoming the first Japanese musician to release a CD-ROM for his album The Seven Colors. He then quit Psy-S to found NanaOn-Sha in 1993. He and his team then released PaRappa the Rapper in 1996, which is often credited as the first modern rhythm game. He then when on to create other rhythm games including Vib-Ribbon and PaRappa the Rapper 2. He was awarded the First Penguin Award by the Game Developer Choice Awards in 2004 for pioneering the genre of rhythm-based games.

Yano co-founded iNiS J in 1996 and his first big project was Gitaroo Man in 2002 where he served as lead programmer. Since then he has developed other cult-classic rhythm games including Elite Beat Agents in 2006. He has also worked on gaming utilities such as the NFactor2 Realtime 3D Engine, MixJuice Interactive Music Engine, and the voice chat interface for the Japanese Xbox. He lists PaRappa the Rapper as a major influence on his career.

4. The Game Was Inspired by Complaints About PaRappa the Rapper

Project Rap Rabbit was spawned from criticisms that PaRappa the Rapper wasn’t a true rapping game and was just another rhythm game. Matsuura hopes that the new mechanics make for a game with true rapping. They also wanted to encourage experimentation instead of just encouraging players to get the highest score possible. The mechanic was also inspired by Epic Rap Battles Of History where historical figures are pitted against each other in rap battles, according to the Kickstarter page.

Project Rap Rabbit is planned for release in August of 2018. The Kickstarter is asking for $1,100,000 to fund the game. The game is planned for PS4 and PC with an Xbox One version planned if they make $3,100,000 on Kickstarter and a Nintendo Switch version if they make $4,950,000. They of course have a number of collector’s editions on offer for contributing a certain amount of money as well as other stretch goals such as new levels and a multiplayer mode. 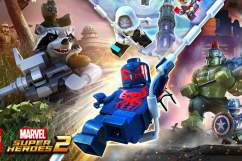